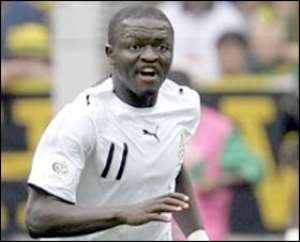 Sulley Muntari - Black Stars Barring any last minute change in time, at exactly 1700hrs GMT Ghana and Egypt will clash in a friendly match in Cairo.

The match which forms part of preparation towards the impending joint 2010 African Nations Cup/World Cup second round qualifiers slated for Angola and South Africa respectively is expected to offer coaches of the two teams the opportunity to assess their side's readiness for the qualifying series.

While the Black Stars host Benin on March 29, the Pharaohs would welcome Algeria to the Cairo Sports Stadium.

Skipper Stephen Appiah who is hoping to secure a contract with Russian champions Rubin Kazan, together with Inter Milan's Sulley Muntari, arrived yesterday for the big game.

The African champions are hoping to beat the Ghanaians to confirm their dominance on the continent and Coach Hassan Shehata has invited his big shots including Mohammed Zidan of Bundesliga side Stuttgart, Essam Al-Hadari of Swiss side SC Sion and Wigan Athletics Amr Zaki.

On the other hand, Milovan Rajevac, the Serbian coach of the Black Stars is hoping some of the new faces including defender Isaac Vorsah and midfielder Mousa Narry will deliver. He is looking forward to beating the African champions in their own backyard.

Though Ghana and Egypt have been meeting at club levels, the last time they met at the national level was in 1992 in Senegal during the Nations Cup where the Black Stars beat the Pharaohs 2-1.