I remember when Ghana beat the US 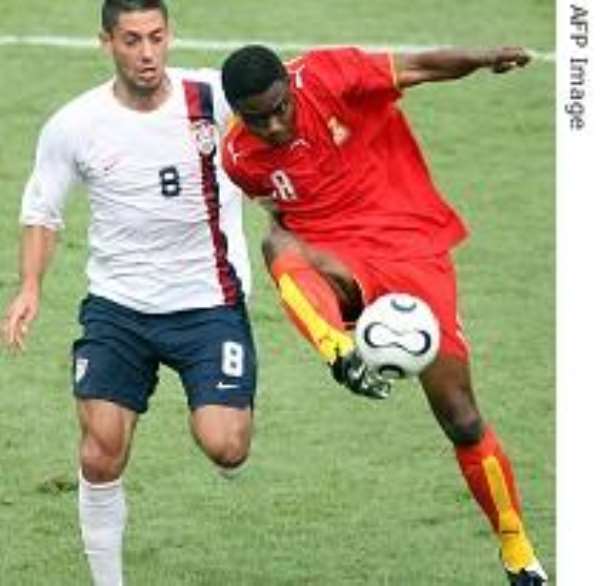 Growing up a Boston Red Sox fan, I've had my share of tragic sports moments. While I was too young to remember the Bill Buckner error, seeing and hearing about it on a yearly basis allowed me to engrain it into my four-year-old psyche. While the team's shortcomings in subsequent years weren't as dramatic, failure becomes part of your sporting experience.

Seventeen years later, while sitting at a bar in Sydney, Australia, with five other displaced Massachusetts natives, my generation of Sox fans earned its own tragedy when after 63 outs, Aaron Boone strode up to the plate, did his best Babe Ruth impression, and stroked a Tim Wakefield knuckler over the left-field fence. It was a plot twist any Boston lifer knew was coming, yet that didn't stop the hurt. Welcome to the fraternity, fellas. Here's a kick in the junk.

Of course, the next season the Sox win the World Series and you celebrate precisely because of that shot to the nuts. You're part of something.

Fast-forward to the summer of 2006, and I'm in the middle of a three-mile trek between Frankenstadion and the town center of Nuremberg, Germany. Half an hour ago, the final whistle blew in the United States' 2-1 loss to Ghana, eliminating the team that three friends and I had traveled almost 4,000 miles — and spent $1,200 on scalped tickets that morning — to see.

It's been 30 minutes since anyone in our miserable quartet has spoken. We've been here before — we're all Sox fans, after all — but past experience never diminishes present heartbreak. Trooping through a German wasteland beside some unnamed road, somewhere along a string of the thousands returning from the stadium, we've each withdrawn into our own spheres. (We rode the train to the game along with hundreds of other chanting Americans, but wordlessly decided that a cramped railroad car was the last place we needed to be on the return trip.)

Occasionally, euphoric Ghanaians drive by and scream at our red, white, and blue-clad group. The first time this happens, one of us yells back, but no one has the energy to even lift his head during future encounters. Besides, they deserve this. Our team choked, but really, it's Ghana's moment.

To advance into the knockout stage and make this World Cup a success, we needed a major miracle (Italy's defeat of a desperate Czech Republic side, which — gut punch — happened) and a lesser one that didn't. Our inability to capitalize when we needed to stings the most, as it's become the calling card of American soccer. (Hello, quarterfinal loss against Germany in 2002.)

At the beginning of the game, we knew we are doomed and yet remained hopeful. The reasons for this false optimism were numerous: The miracle of finding a couple on the street who were willing to sell us two pairs of seats, price be damned. The fact that we traded one of the pairs with an English duo that wanted to be higher up in the stadium (silly Brits), allowing the four of us to sit together, 25 yards from the corner flag. Budweiser in the stadium. Hell, the fact that we were in Germany at all, a trip we've been discussing in vague terms since storming into the early morning, Providence Rhode Island air after beating Mexico four years ago, is cause for optimism. You learn to push the miserable feeling down into the depths of your stomach, to convince yourself this afternoon will be different. This is called being a fan.

Almost from the opening kickoff, however, it's obvious that dread isn't misplaced: Today's plot won't favor the Americans.

Nothing goes right. The U.S. looks tentative, scared, overmatched, a chimera of the squad that went challenge for challenge against (future World Cup champion) Italy three nights prior. When Claudio Reyna turns the ball over in the 22nd minute, further injuring his MCL in the process, and Haminu Draman walks in alone on Kasey Keller before slotting the ball past the American keeper, it's crushing because the reality of the loss is now tangible but none of us are particularly surprised.

There's a glimmer of hope after DaMarcus Beasley outworks three Ghana players, miraculously steals the ball, and slots it across to Clint Dempsey, who blasts the ball into the back of the net with as much force as I've ever seen the round leather object kicked.

Our foursome, perfectly positioned to see the entire play develop, explodes in celebration. (Days later, I notice an enormous black and blue mark on the back of my thigh that can only have come from smashing it into the seat behind me in a moment manic joy. I have no recollection of what I imagine should have been immense pain.)

The goal is cathartic — three matches of frustration channeled into one truly fantastic moment that justifies our trip — but it can't last.

Seconds later, the euphoria subsides when referee Markus Merk calls a questionable foul on Oguchi Onyewu and points to the spot. (Yes, we're 100 yards away. Yes, even from here we know that wasn't enough to warrant the game-altering whistle.) Stephen Appiah buries the subsequent penalty kick and it's over. We still cheer and yell and scream until our hearts are empty, but the outcome is never in doubt, even when McBride's effort dings off the post in the 66th.

Inevitably, the match ends 2-1.
We exit the stadium in a silence that continues until an hour later when we find ourselves back on the streets of Nuremberg, searching for the car so we can exit the city and drive to a destination we haven't yet decided upon. It doesn't matter. Just away.

Life will go on, it always does. The Ghanaians celebrate while we sit — completely drained, unable to drive — in the town square smoking cigars. Eventually, speech returns, haltingly at first but eventually we find our voices. We recount the game: the missed opportunities, the dubious penalty, the hope for the future. We talk about out next destination. We discuss the attractive girls who walk by. We return to the conversations we've had for the past two weeks.

What goes unsaid is that we just witnessed U.S. Soccer's Aaron Boone moment. We all understand this, but it's too early to vocalize. The loss was tough enough; there's no need to add to the pain.

Besides, now we're part of something and, trust me, it only gets better from here.

I haven’t said NPP is Majority in Parliament – Bagbin clarif...
38 minutes ago