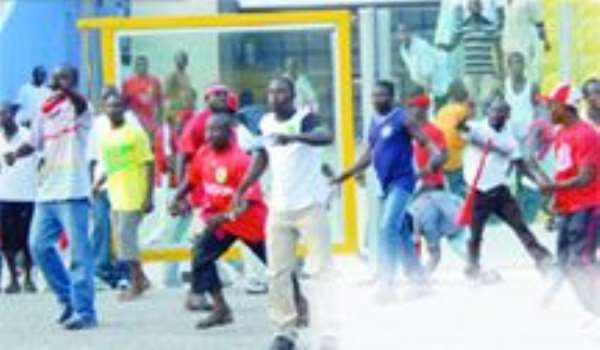 Barely three months after the Confederation of African Football (CAF) handed Kumasi Asante Kotoko a two-match home ban and a $15,000 cash fine for unruly crowd behaviour in a Confederation Cup match against Etoile du Sahel in Kumasi, the Porcupine Warriors risk facing the rod of the GFA for similar offence.

Last Sunday at the Ohene Djan Stadium the drama was similar to the Kumasi episode, except that the referee at the centre of the fury by Kotoko fans was Referee Seidu Bomison and not Codja Coffie.

The fans went berserk, hurled missiles at Referee Bomison and onto the pitch for disallowing what could have been a 90th minute goal for offside positioning by the scorer, Alex Asamoah, in their 1-2 loss to bottom club, Sporting Mirren.

In a re-enactment of the 2001 Accra Stadium May 9 disaster which claimed the lives of 127 soccer fans, the supporters damaged the North Wing (Ade Coker Stand) gate and sections of the inner perimeter as they invaded the pitch to vent their spleen on the match officials.

But the violent acts were shortlived following the intervention of police personnel and some club officials, as well as FA President Kwesi Nyantakyi who prevailed on the fans to go back to the stands.

Coincidentally, the fatal May 9 disaster started from the same North Wing Stands following Ishmael Addo's late goal in Hearts' 2-1 victory in a mid-week clash against Kotoko about seven years ago.

He said poor player selection where certain players like Godfred Yeboah were moved from the left back to central defence, and the fact that the players lacked urgency in their delivery, largely accounted for the defeat.

“This is definitely a wake-up call which we need to learn some lessons from,” Mr Asare, who played a great role in calming down tempers and urging the fans not to destroy the stadium property, said.

But the Assistant coach of Kotoko, Johnson Smith, on his part insisted that Referee Bomison was to blame for Kotoko's first defeat in the season.

Kotoko grabbed the leader on the 29th apparently through an own goal by a Mirren player and not by Louis Agyemang as previously reported. But it was cancelled on the 36th minute by Samuel Solomon from a free-kick before Mahatma Otoo scored the winner for Mirren on the 49th minute mark.

The fans in the detestable October 4, 2008, 2-2 drawn match at the Baba Yara Stadium directed their fury at the Beninois referee, Codja Coffie, for awarding a doubtful penalty against Kotoko, the results of which doomed Kotoko's chances of making it to the finals of the Confederation Cup.