What is your New Year wish? 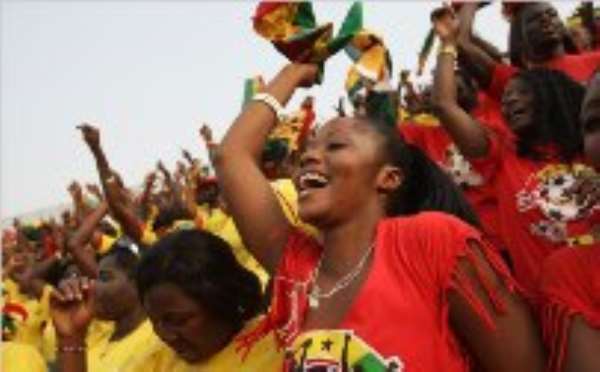 FANS NEED A WORLD CUP TICKET The next 12 months promise a lot of action-packed football calender with a place at the 2010 World Cup in South Africa the top-most prize. Ghana's international campaign begins with the national Under-20, the Black Satellites, at the Africa Youth Championship in Rwanda. The Satellites will be chasing one of the four or five slots- if Egypt qualify for the semi-finals - for the World Youth Championship, a tournament they have failed to a qualify since winning silver in 2001. This will be sandwiched by continental club action for two Ghanaian clubs-Heart of Lions and Asante Kotoko- in the Caf Champions League qualifying rounds. Black Stars head coach Milovan Rajevac leads the local squad at the inaugural African Nations Championship(CHAN) in Ivory Coast The Black Stars begin their chase for the 2010 joint slots in Angola and more importantly South Africa against Benin at home and it will continue in June. 2009 will also afford us an opportunity to solve the domestic puzzle of which club wins the now attractive Glo Premier League. Can Kotoko be toppled by the resurgent Chelsea of Bechem or the rejuvenated Hearts of Oak or the spirited Heart of Lions? Keen interest will be on how Ghanaian players will fare abroad with their respective clubs and see if any can earn any league accolade. So what will dominate your footballing wish-list for 2009? Share your thoughts with us by writing a few words in "our comment box" below or send an e-mail to We're looking forward to hearing from you.