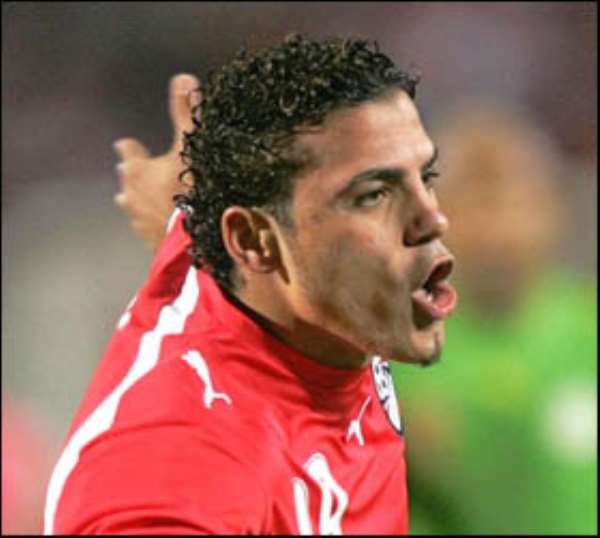 Amr Zaki 1. Mohammed Abu Trika (Egypt, Al-Ahly)
Aside from having the talent, Al-Ahly fans will always remember his down-to-earth and humble personality for decades to come.

The 30-year-old, who started his illustrious career with Al-Ahly at age 26, has led the team to win every major competition they have entered, virtually conquering African Club soccer for the past four years. Al-Ahly are the only club on the globe to make it to the FIFA Club World Cup three times.

Although he refused all offers to play in Europe and stayed loyal to the club that jump-started his stardom, Abu Trika is currently contending for Africa's best player award in 2008. His knack to score in crunch time - whether it was for club or national team - has earned him great respect from Africa's legends.

Nicknamed “Trika” by many Al-Ahly fans, the explosive central attacking midfielder scored probably the most breathtaking goal in the 91st minute of stoppage time against Safaxien of Tunisia that won Al-Ahly the African Champions League in 2006.

With the Egyptian National team, he converted the cup-winning penalty against Ivory Coast in 2006. In the African Cup of Nations in 2008, he scored the cup-winning goal against Cameroon in the dying minutes of the game.

2. Samuel Eto'o (Cameroon, Barcelona)
Barcelona did not win anything last term and even wanted to make the Cameroonian star one of the scapegoats for this, but the three-time African Player of the Year has since proved he still knows his way to goal, with an incredible 14 goals in La Liga already. Last season he was hampered by injury and even came close to leaving Camp Nou this summer.

At the Nations Cup in Ghana, he put to rest the all-time scoring record of 14 goals set by Ivorian striker Laurent Pokou by scoring a total of 16 and counting.

3. Emmanuel Adebayor (Togo, Arsenal)
Filled the goal-scoring void left by French legend Thierry Henry at Arsenal last season by scoring 30 goals in all competitions. However, the Gunners failed to land any piece of silverware.

He has also kept Togo in the reckoning for a second World Cup finals appearance after putting four goals past Swaziland.

4. Amr Zaki (Egypt & Zamalek, Wigan Athletic)
A powerful package of strength, restlessness, and energy, Amr Zaki did not disappoint upon landing at the JJB Stadium on a loan from Egyptian side Zamalek FC.

It is little wonder that he has now been linked with some of Europe's top guns by the time his loan deal at Wigan runs out, though Steve Bruce is understandably eager to keep the goal machine at the JJB Stadium.

He arrived in the Premier League as Steve Bruce, Wigan Athletic head coach, spotted the 25-year-old talent through the African Cup of Nations in 2008. Zaki scored three times, with a crucial winning goal against Ivory Coast in the semifinals.

Egypt cruised through to capture their second consecutive African Cup Of Nations in 2008.

He was also the heart and soul of an average Ghana Black Stars side that exceeded many expectations to reach the last four of the Nations Cup they hosted in February.

6. Didier Drogba (Ivory Coast, Chelsea)
Injuries and controversies made sure that the big man failed to match his performance of the 2006/07 season, when he was far and away the best African player.

He has yet to reach his high standards again, but when he does, it will be to the benefit of both club and country. Still, performed well for Chelsea and proved an asset whenever he was in the team.

7. Sulley Muntari (Ghana, Inter)
The prolific Ghana midfielder has made his way back to the familiar terrain of Italy after leaving Udinese for a season at Portsmouth (he won an FA Cup).

Jose Mourinho has praised the 27-year-old and seems comfortable to transition back to the Italian style of play. Most importantly, he has avoided any kind of problems with his egotistical coach, unlike Adriano.

In the African Cup Of Nations, Muntari played a major role toward their quest for the title, which ended in a disjointing defeat to Cameroon in the semifinals.

8. Frederic Kanoute (Mali, Sevilla)
Named Africa's player of the year in 2007, Frederic Kanoute is thought to be one of the most clinical finishers, not only in Africa, but the world. His spell in Spain with Sevilla FC has gained him worldwide recognition.

Kanoute led Sevilla to become only the second team to successfully defend the UEFA Cup title, following Real Madrid, who achieved this feat in 1985 and 1986. Kanoute netted a late equalizer versus RCD Espanyol that proved to be vital in their endeavor towards the title.

With his national team, Mali, the 31-year-old led them to their fifth African Cup of Nations appearance in 2008, where they were thrashed by Ivory Coast in their final preliminary stages game.

9. Mohamed Zidan (Egypt, Borussia Dortmund)
Standing at 5'9” (1.77 m) does not attract club managers, general managers, or even the fans. But once this 27-year-old Egyptian striker sets foot on the pitch, jaws drop and GMs start making some important calls.

At the Bundesliga, Hamburg SV proved to become an uncomfortable frame for the skillful Egyptian.

His switch to Borussia Dortmund has seen him re-showcase his offensive talent. Just last season, he scored three goals in just six matches for Hamburg, with a game-tying goal against giants Bayern Munich.

10. Jon Mikel Obi (Nigeria, Chelsea)
The 21-year-old midfielder exhibited some rugged qualities many thought he did not possess at the 2008 African Cup of Nations held in Ghana. At Stamford Bridge, Luiz Felipe Scolari has given the youngster more responsibilities to grow with as his fellow midfielder Michael Essien recovers from an injury.