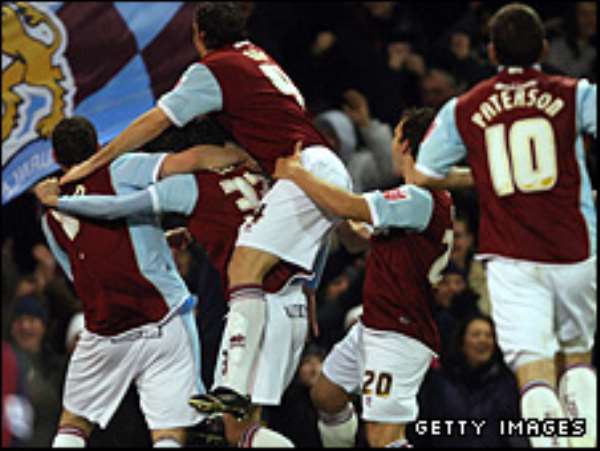 
McDonald opened the scoring after just six minutes, tapping home from close range after keeper Lukasz Fabianski had spilled the ball into his path.

The second came shortly into the second half with McDonald curling the ball past Fabianski from a tight angle.

Arsenal had several chances but found Burnley keeper Brian Jensen in fine form on a memorable night at Turf Moor.

Arsenal manager Arsene Wenger kept true his promise to again field his youngsters who had been so impressive in their path to the quarter-finals of the competition.

Despite their lack of experience, Arsenal played with composure and elegance and at times were breathtaking in their play.

But as is so often the case with Arsenal, wastefulness in front of goal cost them dear as they came up against an organised and clinical Burnley side.

It was Arsenal who had the first chance of the game with Bendtner calling Jensen into an early save but the Danish striker fired straight at the legs of the Burnley keeper.

Just 80 seconds later, Burnley had the lead.
Chris Eagles created it, sending in a low cross from the right which keeper Fabianski spilled under pressure from Martin Paterson and McDonald was on hand to tap the ball home from six yards.Arsenal had chances to equalise, several of them in fact, but Wenger's side, who had been clinical in front of goal in previous rounds, were in wasteful mood.