Ghanaians back Adebayor for BBC award 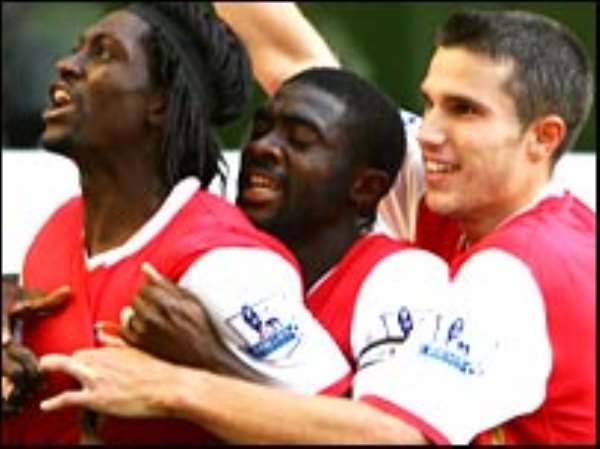 Adebayor was in Ghana with his trophy Ghana football fans are backing Arsenal striker Emmanuel Adebayor for this year's BBC African Footballer of the Year award.

Black Stars midfielders Sulley Muntari and Michael Essien were not part of the five players shortlisted for the award decided by fans.

This means Ghanaians will support the reigning award holder Adebayor, who was raised and educated in Ghana.

The Arsenal striker affirmed lineage to Ghana when he toured the country to thank fans in the country for voting for him in last year's wards.

He also supported an orphanage in Kumasi before paying a courtesy call on the Asantehene in Manhyia.

The affinity with the country as well as his sterling performance for Arsenal and Togo over the past year is the reason why Ghanaians are rooting for him.

You can vote for Adebayor right up until 9 January and the winner will be announced a week later.

Click here for the instructions on how to vote for Adebayor http://www.bbc.co.uk/worldservice/africa/2008/11/081126_afoy_08_vote_page.shtml

The prestigious award is the only one of its kind to be decided ultimately by the fans.

The BBC canvassed football experts across Africa to compile the shortlist.

Last year's winner was Emmanuel Adebayor of Arsenal and Togo, who used the award to launch his so-called 'Tour of Hope' back to his home country.