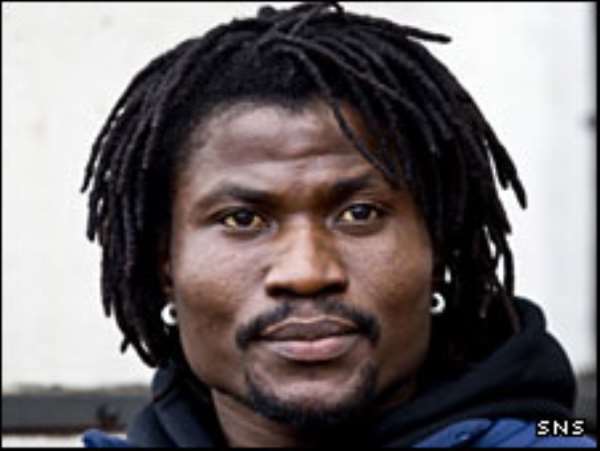 Kingston wants to stay at Hearts Hearts midfielder Laryea Kingston says he has not fallen out with manager Csaba Laszlo - and is willing to discuss extending his contract.

Despite being unfit to play, the Ghanaian joined up with his national team last week against Laszlo's wishes.

"There's no problem with Csaba. He's my manager but also like a father to me and we're both happy and working together at training," said Kingston.

Kingston has not featured in the Hearts team for the last five matches since he tore a thigh muscle in the 1-1 draw with Hibernian in October.

And the injury was aggravated at training with the midfielder eager to return to action as quickly as possible.

However, the 28-year-old was asked to travel to Accra in order to prove to his national manager that he was unfit to feature in the last week's friendly against Tunisia.

Club boss Laszlo would have preferred his player had not made the 4000-miles round trip, prompting reports of a fall-out between the pair.

But Kingston refutes that suggestion and says he is now raring to get back into the manager's team.

"Sometimes you have problems at home, but it doesn't mean the world is finished," said Kingston.

"Problems arise, but they can be solved.

"I'm very happy right now, I feel very good and I've trained all this week without pain in my thigh."

Hearts are currently third in the Scottish Premier League after winning their last four matches and host Rangers in Saturday's early kick-off.

And Kingston, signed from Terek Grozny for ?500,000 in July 2007, says he does not expect to walk straight back into the team.

"Winning those four games has given us a lot of confidence that we can match Rangers," said the midfielder, who was launching a sponsorship deal to educate school children on the benefits of health eating.

"Even though I've been out of the team, I'm happy to see us winning all theses games.

"We have a lot of good players and I like challenges, so it's going to help me to improve my game as I try to get back in to the side."