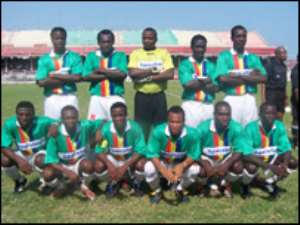 HEARTS HIT THE ROAD Accra Hearts of Oak made a winning start to their league campaign after beating newly-promoted Sporting Mirren 0-2 at the Ohene Djan Stadium on Monday night.

Two second half goals were enough to deny Mirren which had chunk of territorial dominance but lacked the cutting edge.

Striker Eric Gawu slotted in the first goal on 87 minutes after he was left unmarked in the box.

Winger Douglas Nkrumah's corner-kick at the death of the game richocheted the foot of the Mirren goalkeeper at the near  post and rolled into the net.

Hearts move to second place on the log sheet.