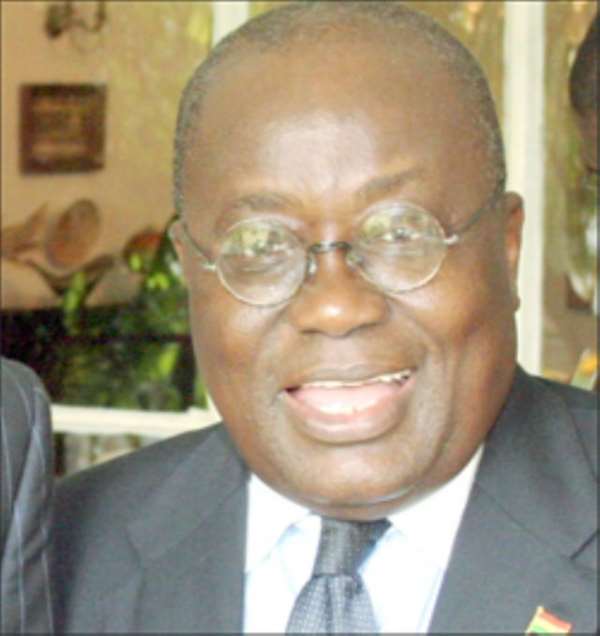 To remedy the situation, Nana Addo indicated that the next NPP government under his watch would establish an Institute for Chieftaincy to train potential and new chiefs in conflict resolution, administration and ethics.

The NPP Presidential candidate made this known at the Great Hall of the Kwame Nkrumah University of Science and Technology (KNUST) in Kumasi yesterday when he outlined his vision for the country's arts and culture sector.

With the presentation entitled, “The New Ghana; A New Age for the Arts and Culture Industry”, Nana Addo became the first among the eight presidential candidates contesting this year's election to lay bare his vision for the nation's arts and culture industry.

Stressing that the chieftaincy institution plays an important role in the development efforts of the country, the NPP leader said his government would in consultation with relevant stakeholders introduce a legislation that would dedicate a certain portion of revenues accruing to chiefs for the development of their respective areas.

He emphasized that when voted into power he would provide funding to improve the capacity of traditional authorities and regional houses of chiefs to make the institutions more effective and accountable.

Nana Addo disclosed that his government would collaborate effectively with the National House of Chiefs to document the succession, history and traditions of each stool in the country as a prospective means of reducing ambiguities in succession that lead to disputes and sometimes violence during successions.

He promised that the long awaited effort to strengthen the capacity of the regional houses of chiefs by providing them with lawyers to expedite the adjudication of disputes would be realized under his headship as the first gentleman of the land.

The NPP Presidential nominee pointed out that his administration would strictly ensure that traditional rulers work closely with the Lands Administrative Project to improve accountability with regard to the sale of land and the use of proceeds resulting from such transactions.

When voted as the country's next President, the former Foreign Affairs Minister said apart from working hand-in-hand with appropriate stakeholders to pass the needed legislation where necessary, his administration would educate the public about the voluntary discontinuation of outmoded and inhumane customs, while promoting the adoption of more humane ways of following our traditions.

He mentioned some of the outmoded and inhumane traditions as female genital mutilation and undesirable widowhood rites for women in some parts of the country among others.

The former Attorney General and Minister of Justice observed that his government would find monies to revitalize various forts in the country and other structures dotted at the coast which were associated with the slave trade as a means of giving an extraordinary profile to the country's coastlines.

He said the revitalization of the afore-mentioned structures together with investments in roads and accommodation would give significant boost to the country's tourism sector to lead the way in the creation of jobs.

The would-be successor to President Kufuor declared that his government would take a giant step to develop museums and monuments so that various aspects of the country's culture could be preserved and promoted.

Undoubtedly, festivals promote a collective bonding and cultural awareness; therefore the NPP Presidential hopeful noted that his administration would cautiously ensure the promotion of festivals and cultural activities in the country.

He disclosed that his government would establish a cultural village in the Ashanti region to serve as a place for the preservation and innovation of arts and culture where traditional and modern architecture could be blended to modernize the country's culture.

The astute lawyer and economist indicated that the next NPP government under his leadership would review and strengthen the copy-right laws so as to give adequate protection and assistance to the country's music artistes.

Promising that he would be a firm but good friend to stakeholders of the culture and arts sector, Nana Addo urged the citizenry to be proud of the country's cultures and also patronize wholly Ghanaian arts as a means of boosting the industry.

The NPP Presidential candidate paid glowing tribute to all illustrious sons of the land who contributed in diverse ways to promote and preserve the various cultures of Ghana.

In attendance at the function were renowned Ghanaian musicians including Agya Koo Nimo, Nana Ampadu, Kwabena Kwabena among others.

As usual, enthusiastic party supporters clad in party colours also attended the programme to give moral support to their Presidential aspirant.