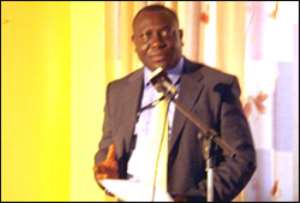 Information reaching the sports desk of DAILY GUIDE indicates that the acting Chief Executive Officer (CEO) of Hearts of Oak, Vincent Odotei Sowah has resigned due to differences with other members of the management team.

Faced with a mounting tide of pressure from Hearts fans and irreconcilable differences with some board as well as management members, the CEO was compelled to throw in the towel last Thursday evening.

Mr Odotei Sowah was reported to have stormed out of Hearts board meeting, saying as he did so: “I have stopped this work. I won't do it again.”

Hearts of Oak, Ghana's premier club, has for sometime now been plagued with a myriad of issues including player discipline, management problems and poor showings.

Last season, Hearts, defending Onetouch Premier League Champions, placed eighth on the league table, after some relegation scares, breaking the hearts of so many fans.

With the fortunes of the team not improving even in friendly matches, and unwilling to go through the same ordeal when this season's league resumes next month, hearts fans took to the streets last Thursday evening, matching to the Asylum Down headquarters of the club in Accra and demanding the resignation of the CEO.

The irate fans, who chanted: “Vincent Odotei, away”, “Harry Zakkour, away”, “Ernest Thompson, away” and “Commodore Mensah, away” among others, besieged the headquarters of the club, which was hosting a board meeting at the time, till late in the night.

In an interview on Happy Fm, an Accra-based radio station, Alhaji Hearts stated that Mr Odotei Sowah had brought this problem upon himself.

“When some members of the Hearts Board told him to bring his C.V. for the job, I told him as a friend that he should not do it. There is more to managing Hearts than meets the eye.”

In an interview with DAILY GUIDE SPORTS , a die-hard Hearts fan, Adjei Oparaku aka 'Bayaawa' intimated that the declining fortunes of the club should concern all fans and indeed all football lovers in the country.

“We are beginning to get fed up with the way the club is being managed. They (management) don't seem to know what they are doing.

“They dismissed (Francis) Bossman and co, and then recalled them. They haven't done any proper signing for next season. Do they want us to go through what we went through last season? We say 'no way”, he charged.

Meanwhile, the Board of Directors of the club has stated that it had taken note of the fact that Vincent Odotei Sowah had informed all at the Thursday meeting that he had decided to resign his position and also withdrawn his application for the position of a substantive Chief Executive Officer.

A press release signed by Board Chairman Commodore Mensah indicated that the directors of the club had accepted the resignation of Vincent Odotei Sowah and that the board would handle all matters that fell within the powers of chief executive of the club.

“A three-man committee has been formed to interview applicants for the position of Chief Executive. This interview will take place within the next two weeks.”

The board appealed to all supporters to remain calm while all issues are sorted out.