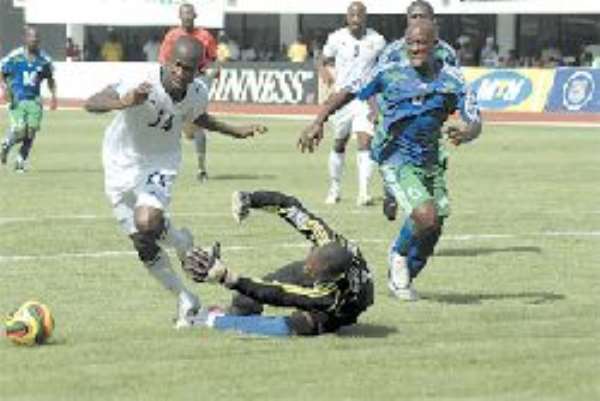 Glittering Black Stars compensated for the prolonged discomfort of their fans at the overcrowded Sekondi Stadium last Saturday with an emphatic 3-0 thrashing of the Crocodiles of Lesotho which propelled them to the top of Group 5 in one of the dramatic finishes in the preliminaries of the joint 2010 World Cup/Africa Cup qualifiers.

However, any celebration for the massive victory had to be put on temporary hold till after FA officials had broken to the players the good news of Gabon's 1-0 home win over Libya.

Spontaneous jubilation greeted Ghana's dramatic finishing on top of the group as the Stars players joined hands for a lap of honour to acknowledge cheers from the excited crowd.

In their determination to live up to the expectation of Ghanaians and also give new coach Milovan Rajevac his first win in three games, the Stephen Appiah-led Stars took off to a blistering start and succeeded in killing the game before the half-hour mark, as admitted by Lesotho coach, Milosavljevic Zavisa, after the match.

Inter Milan midfielder, Sulley Muntari, grazed the upright with a header to give the fans an appetiser after just 11 minutes before setting the entire stadium roaring with a typical blinding shot just outside the box on 19 minutes.

Though the Stars continued to overwhelm their opponents with their midfield dominance and sweet passing game, they kept the anxious fans sitting on the edge of their seats till after the 62nd minute when comeback kid, Matthew Amoah, capitalised on a defensive lapse by Moitheri Ntobo of Tunisian side, Monastir, to score a great goal that would be the envy of many a world class striker.

As if to atone for his 41st minute bad miss, the NAC Breda striker who leads the Eredivisie's scorers' chart with eight goals from five games, swerved past advancing Ketsekile with the speed of light before sliding the ball home in characteristic fashion to announce his return with a bang.

But the revelation of the afternoon was Daniel Yeboah (Argentina), who made his debut in the Black Stars. He combined effectively with tireless Anthony Annan and evergreen Stephen Appiah in midfield with his tailor-measured passes and high work rate.

On the few occasions that the Crocodiles attempted to cause harm by translating their midfield play into attack, they lacked bite upfront giving John Mensah, Eric Addo, John Paintsil and Afful an easy task of tidying up for holidaying goalkeeper Richard Kingson.

So toothless were the Crocodiles that the homesters did not concede a single corner kick throughout the game. Also, Sudanese referee, Abdel Rahman Khalid, had no cause to make any bookings, indicating how clean the entire game was.

On the flip side, the absence of a changing board at the touchline for well over 30 minutes summed up the poor organisation of this destiny-defining encounter.

Appiah, who showed glimpses of his usual self after an 11-month lay-off, received a thunderous applause from the stands when he gave way for Eric Bekoe five minutes from the end, while Prince Tagoe and Haminu Draman who replaced Agogo and Muntari in the 75th and 80th minutes respectively could hardly penetrate the defence of the Basotho.