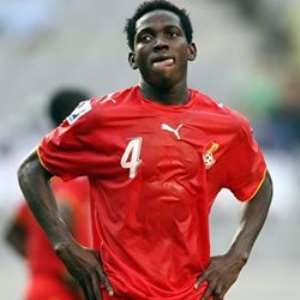 There are reports of seroius competition for places in the Black Satellites camp for starting roles ahead of Sunday's first round African Youth Championship qualifier against Angola at the Ohene Djan Stadium. Head coach,Sellas Tetteh,is struggling to name his starting line-up which included a star-studded team that placed fourth at last year's fifa Under-17 World Cup in Korea.

Paul Aidoo,who captained the team at the Under-17 level,is likely to be dropped for Wa All Stars' David Addy, a member of the local Black Stars squad and for the joint 2010 qualifiers.

The competition in midfield is also intense as Emmanuel Agyeman Badu and Nice's recruit Enoch Adu-Kofi will battle for the holding role.

The technical team is struggling to decide who partners Kessben FC's Ransford Osei in attack. Athletico Madrid's Sadick Adams lack the required playing time due to the late completion of his transfer.

Udinese's Rabiu Mohammed,who was on loan at Spanish second division side,Gimnastic,races with Sekondi Hasaacas' Isaac Donkor who has found his scoring boots in the Onetouch Premier League.

Sellas Tetteh wants to banish Ghana's seven-years unsuccessful attempt to qualify for a major Under-20 competition since winning silver in Argentina 2001.

The team will wrap up their preparation with a trainining session at the Ohene Djan Stadium on Saturday.