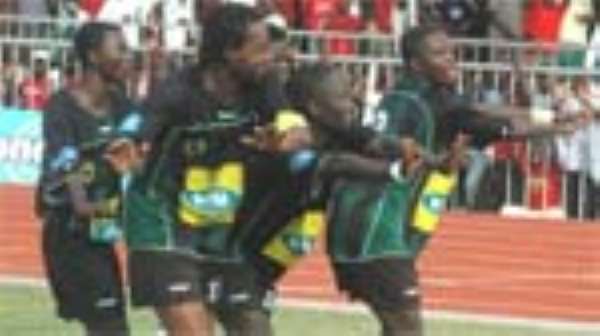 Kumasi Asante Kotoko yesterday progressed to the last round of the CAF Confederations Cup when they whitewashed Dolphins of Nigeria 4-1 in the second round of the competition.

The victory, which has been christened 'The Miracle of Oseikrom', thus put Kotoko on a 4-3 aggregate win after losing the first leg by 2 goals to nil in faraway Port Harcourt, Nigeria.

The match was rained off on Sunday due to a water-logged pitch.
It was indeed a miracle, with the Porcupine Warriors clawing back into the game after all had seemed lost for the homesters.

Though the Nigerians had stunned Kotoko in the early stages of the game, the Fabulous lads lived up to their accolade by putting four goals at the back of Dolphin FC's net.

Defender Samuel Inkoom scored twice when he equalized for Kotoko in a goal mouth melee in the 41st minute and again added the fourth in the 89th minute of the game.

Striker Eric Bekoe also scored twice in the 71st and 85th minutes of the game to send the signal that Kotoko will be a difficult side to beat in this year's competition.

Kotoko had earlier scored an own goal which made their fans sit on tenterhooks for a greater part of the game.

Indeed, how Kotoko came back into the game to score four goals reminded football fanatics of the 5-1 demolition of Zamalek by Kotoko in 1985 at the same venue in the then Africa Clubs Championship.

That was the time Kotoko paraded the likes of Papa Arko, Opoku Nti, John Bannerman and Kofi Badu, just to mention a few.

In yesterday's game, midfield generalissimo Stephen Oduro who had a brief stint in South Africa brought a change in the second half when he came on, whilst speedster Ofosu Amoah brought a lot of bite into Kotoko's attack.