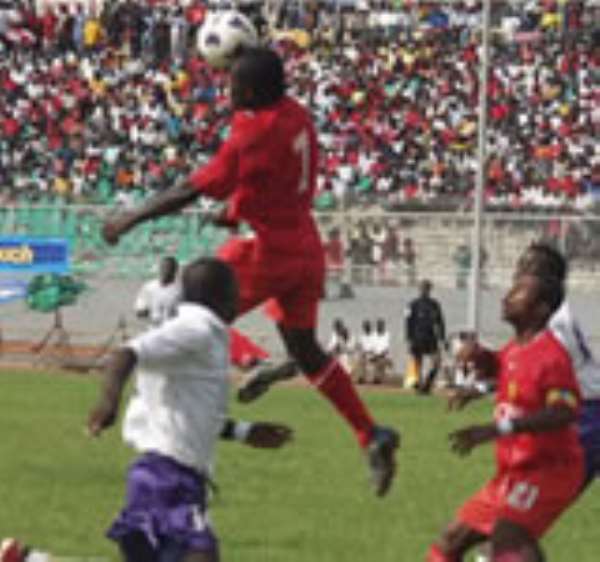 
The second leg of the Confederation Cup match between Kumasi Asante Kotoko and Dolpins of Nigeria has been rescheduled for Monday, May 12 following a heavy downpour at the Baba Yara Sports stadium in Kumasi on Sunday.

Before the match was called off, Kotoko were ahead with one goal scored by Jordan Opoku in the 45th minute of the first half.

Dolpins inflicted a 2-0 defeat on Kotoko in the first leg played in Nigeria two weeks ago.

The rains started in the 22nd minute of the half making ball control very difficult but the players of the two teams were not deterred as they kept their composure.

Kotoko with the two goals deficit fought like wounded lions and nearly took the lead in the first minute but Francis Coffie missed the posts narrowly an Eric Bekoe's cross.

The 'Porcupine Warriors continued to probe for early goals but the visitors decided to pack their defence and stood gallantly and in the 15th minute an injured Bolo Bello gave way to Akeem Yakubu.

In the 23rd minute, Bekoe nearly scored but his shot went off target.

Determined to maintain their two goal advantage, the Nigerians resorted to rough tactics and referee Jose Antonio of Angola did not hesitate to flash the yellow cards on Victor Babayaro, skipper of the side and Owaznuke Wobo in the 32nd and 34th minutes respectively.

After soaking the incessant pressure from the Kotoko aggressive attack spearheaded by skipper Nana Arhin Duah, the Dolphins defence finally gave way for a goal in the 45th minute after their agile goalkeeper Ejiogu Chijioke failed to make a first time save and pushed ball to Jordan who made no mistake to blast the ball into the net.

The rain continued to pour and did not cease even when the second half was about to resume and the match officials had no alterative than to call the match off after inspecting the water-logged playing pitch.