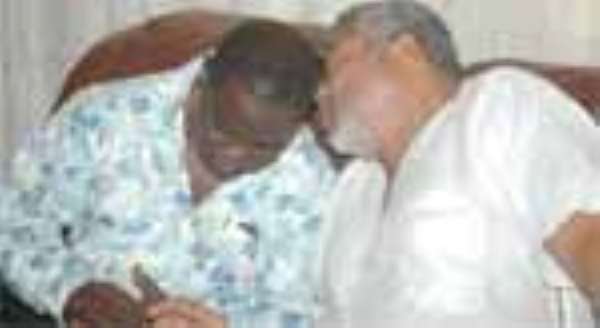 In a move to woo other opposition political parties to his side, former President Jerry John Rawlings yesterday stretched a hand of courtship to political figures from parties outside his own National Democratic Congress (NDC), to join him in doing honours to local boxing legend, Prof Azumah 'Zoom Zoom' Nelson.

The occasion, which according to him, was to acknowledge the boxer on his induction into the International Hall of Fame, saw the former President displaying copious hospitality to people who in the recent past were subjects of scorn and verbal abuse.

It was not clear why Jerry Rawlings invited the two politicians to receive the legendary pugilist.

Whilst there, their host who doubled as the MC for the occasion, administered a certain touch of camaraderie which no doubt made the august guests feel at home and perhaps marvel at the rare unfolding development.

Even members of the press who turned up at the residence noticed a vast change in the manner in which they were screened.

In previous security arrangements, the security details were particular to find out which media organizations were turning up.

Although Mr. Rawlings sought to limit the occasion to the subject of showing respect to Azumah, popularly called 'Zoom Zoom', the ex-president finally veered into politics.

He shed tears for the Ga people, who according to him, were at the receiving end of politicians who want to break the will of a people.

“When politicians want to break the will of a people they turn to the Ga people,” he said.

Before he stopped himself with the Ga expression, “akee minwie tso”, to wit, “they say I am talking too much”, he subjected his hosts to a speech on politics and what he described as psychology.

He observed that most boxers hail from the fishing communities like Bukom and Chorkor but added some of these sports personalities are pitiable sights when one sees them.

Mr. Rawlings also pointed at Lagostown and Nima, two areas in Accra that contributed towards the development of boxing in the country.

“I do not want to indict any political party but…..” he said.
Savouring the days of the PNDC junta, he said between 1979 and 1980 when things were rough in the country “there was hope and people gave of their best”.

He turned to Azumah Nelson who was the cynosure of the engagement at Ridge and said after speaking so much Ga, “next time ba ni wo wie Ga” to wit, “next time come and let us speak Ga”.

He recalled how he had felt when he saw a former boxing legend, Oblitey Commey.

“I organized some rice and money for him,” he said.
The life of a fisherman, he noted, was next to death because “they leave home very early in the morning facing the elements.

“I do not have a degree in psychology but I can lecture you on issues,” he said.

He extolled the exploits of Azumah Nelson whom he said he had known for many years now.

The boxing legend, he noted, had reached where he was because of discipline and determination.

Rawlings said he had predicted long ago that Azumah would become a champion when he observed his seriousness.
“I did not encourage him to join us because he needed to be left alone as Azumah,” he said.

Upon completion of his speech, Rawlings invited Dr. Edward Mahama to add his voice.

Dr. Mahama supported Rawlings' position about the importance of discipline. “I want to pick up from what former President Rawlings said. Determination and discipline are two elements which can get anybody anywhere.”

The youth of Ghana, he noted, had proved to be more disciplined than their adult counterparts, with reference to the exploits of Azumah Nelson.

Dr Osafo of CPP, when he was prompted by Rawlings the MC, recalled how as a Masters student in the US he could not sleep until a bout involving Azumah and an opponent was over.

“I have been a great admirer of Azumah,” he said, adding that to be inducted into the Hall of Fame was a great honour.

Such honour in places like the US, he pointed out, was a great achievement which Azumah rightly deserved.

In his response, Barima Azumah Nelson described Rawlings as his friend, manager and brother.

“I thank Rawlings for inviting me. Rawlings is my brother, friend and my manager. My 'thank you' is not enough. God will thank him for me,” he said.

Azumah recalled that when he was billed to fight Fenech, the former President was not comfortable with the possible outcome.
“I told him I was going to knock him out. I did it and called him after that,” he said.

Rawlings responded to Azumah's speech by explaining that he was nervous when the boxer was going into that fight because “Fenech was a tough guy. Azumah is at his best when he is left alone but I told him not to knock him too hard.”