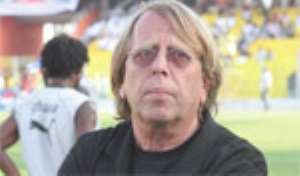 Black Stars' coach Claude LeRoy could be in line for the Bafana Bafana coaching job vacated by Carlos Alberto Parreira yesterday.
The Brazilian's resignation was officially announced by the South African Football Association (SAFA) after a lengthy meeting between the parties.

No successor was named, though assistants Pitso Mosimane and Jairo Leal will remain in charge in the interim.

LeRoy was interviewed for the position in 2006 before Parreira was finally appointed. The Black Stars coach has previously described the Bafana Bafana job as a “dream job”.

A SAFA insider says LeRoy has submitted his CV again this time around, though it is unclear how his submission has been received by the SAFA hierarchy, or whether he is a serious contender for the job.

LeRoy, who led Ghana to third place in the recent Africa Cup of Nations finals on home soil, is understood to have a two-year contract from the Ghana Football Association on the table, but he is yet to put pen-to-paper.

He took over Ghana after the 2006 World Cup in Germany and has led them to 14th in the FIFA World Rankings, their highest-ever position.

Parreira told South African media at yesterday's news conference that he and SAFA had come to an amicable decision that he will relinquish the post of head coach from May 2, 2008.

“It was a very difficult decision to make but I need to dedicate more time to my family.

I will remain available to ensure a smooth transition until the new coach is available and I am also available for consultation as a technical advisor,” Parreira said.

“I regret very much that it has come to this but my family needs me, especially my wife.

Every human being needs to find balance between their personal and professional lives”.

From The Spors Desk