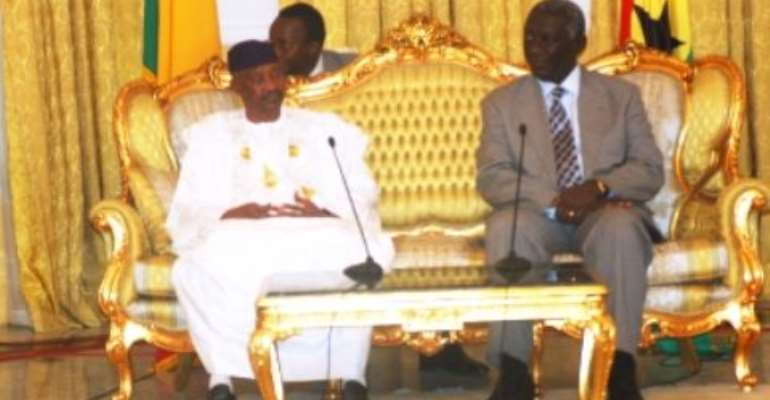 
At the Jubilee Lounge of the Kotoka International Airport to officially receive him when his aircraft touched down at 16:15 hours were President John Agyekum Kufuor, Vice President Alhaji Aliu Mahama, Ministers of State and members of the Diplomatic Corps.

After exchange of pleasantries by the two leaders and the presentation of the 'Akwaaba' bouquet by nine-year old Gloria Arkoh of the 'He Cares Academy' at Lapaz in Accra, President Kufuor escorted him to the saluting dais.

The Ghana Armed Forces Central Band then struck the national anthems of Mali and Ghana as the traditional 21-gun salute boomed at the background.

Thereafter, President Toure inspected a Guard of Honour mounted by three officers and 96 men of the First Infantry Brigade, Michel Camp, and under the Command of Captain Alfred Martey, amidst beautiful rendition of some popular Ghanaian highlife tunes by the Band.

The visiting Head of State was later introduced to the welcoming party by the host President as a cultural troupe gave him a taste of the rich Ghanaian culture by treating him to traditional drumming and dancing.

From the Airport, President Kufuor and President Toure drove in a convoy to the Castle, Osu, for bilateral talks. He was accompanied by a high-powered delegation made up of top ranking Ministers and businessmen.

President Kufuor, in brief remarks before the start of the bilateral talks said the two West African countries had related well for centuries. 'Our peoples have related and interacted in all aspects of social life. We have traded from ancient times in livestock, salt, kola and other items.'

He also made reference to the strong bond of friendship Ghana's First President, Osagyefo Dr Kwame Nkrumah struck with his Malian counterpart, Modibo Keita culminating in the formation of the Union of Ghana-Guinea-Mali and said although the union could not last, the sentiments remained.

President Toure said there was the need to ensure further strengthening and consolidation of the friendship and to deepen their bilateral relations for the mutual benefit of their peoples. He said he was impressed with the tremendous physical transformation of Accra in recent times and praised President Kufuor for his leadership. President Kufuor, in December 2006, paid a State visit to Mali.