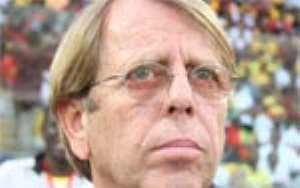 Two of the three new invited players ply their trade in the domestic Onetouch Premier League.

The newcomers to the Black Stars for the game against the Mexicans at the Craven Cottage in London are Prince Buaben, Richard Manu and Eric Bekoe.

Buaben, who turns 20 next month plays for Dundee United after joining the Scottish side from Ajax Amsterdam at the beginning of the season.

Bekoe, who scored his 11th goal in the league on Sunday and his Kotoko teammate, Richard Manu a central defender, both earn their first senior call ups after an impressive run in their debut season for the Porcupine Warriors.

The international friendly game to be played in London on March 26 would be the first match for Ghana, bronze medalist at the just-ended Nations Cup, since their elevation to their status as Africa's best footballing nation.

The match would be the second international game between both sides after their March 2006 friendly in the United States, which the Mexicans won by a lone goal.

Ghana will use the game as one the preparatory match toward the 2010 World Cup and African Nations qualifiers which begins later in June.