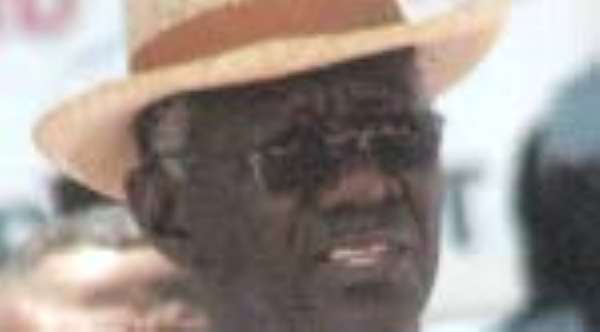 President John Agyekum Kufuor has congratulated the Black Stars for the spirited performance they put up against the Indomitable Lions of Cameroun in their semi-final match in the ongoing MTN Cup of Nations 2008 played at the Ohene Djan Stadium on Thursday.

In a message to the Stars and their handlers, the President said even though they lost narrowly to the Lions (0-1), they were splendid on the day and proved beyond all reasonable doubt that they deserved to win.

President Kufuor noted that the loss of the Stars' inspirational Captain in Stephen Appiah and John Mensah did not demoralize them but rather in all the matches they played, they proved very formidable as a team.

He stated that the Black Stars remains the team to watch in all subsequent continental and world football tournaments and urged them to hold together, pledging his government's continued support for them.

President Kufuor thanked the coach and all members of the Management and Technical staff for the effort they put in to bring the Black Stars to the semi-final level, their first in 12 years.

He further expressed appreciation to all the supporting clubs and the entire country for the high level of patriotism and support they showed and gave to the Stars during the tournament.