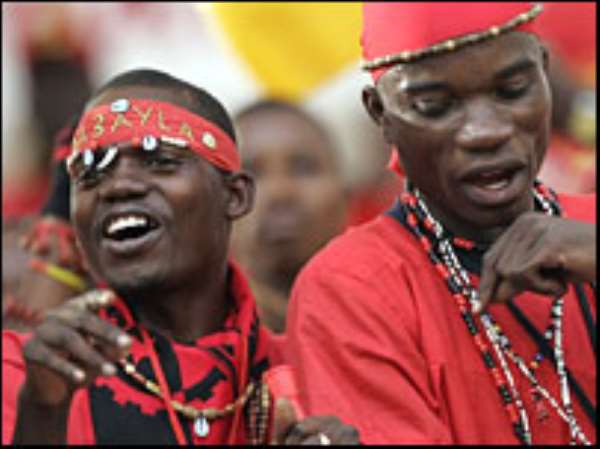 Angola made it through to the Africa Cup of Nations quarter-finals for the first time after a goalless draw with Tunisia in Tamale.

Tunisia are also through to the last eight after topping Group D where they will play Cameroon. Angola face Egypt.

Armine Chermiti came closest to scoring when the Tunisian headed wide of an open goal from a first-half free-kick.

Angola's Flavio fluffed his side's best chance late in injury time when he shot tamely at the keeper from 15 yards.

The result, though drab for the fan used to goals galore at the Nations Cup, means that Angola finished with the same points and goal difference as Tunisia, but were beaten into second place in the group because the Carthage Eagles had scored one more goal after three games.

606: DEBATE
Can someone wake me up when this game is over?

Despite both coaches voicing their intentions to go out and win the game, the tie always looked odds-on to produce the draw that would see both sides through.

Tunisia's Roger Lemerre started with both Yassine Chikaoui and hat-trick hero Francileudo dos Santos warming the bench, while Chermiti returned to the Carthage Eagles' attack after serving a two-match suspension.

And it was Chertmiti who had the first chance of the game after 16 minutes when the 20-year-old stole the ball from the feet of Angolan defender Kali and tested Lama from the edge of the area with a low shot.

Lemerre may have been criticised for not starting with Dos Santos, but Chermiti was proving to be a difficult attacking threat to contain in his replacement.

A few minutes later Yassine Mikari found Chermiti in space at the back post with a 30-yard free kick, only for the youngster to head wide from three yards with the Angolan goal at his mercy.

Palancas Negras' coach Luis Goncalves had stuck with the strike partnership of Manucho and Al Ahly's Flavio in a bid to seal Angola's first appearance in the knockout stages.

Despite this Angola had created few goal-scoring chances until Leeds United's Rui Marques played a neat pass from the right wing to Ze Kalanga, who dashed into the penalty area, lost his marker and fired against the keeper from 15 yards.

Manucho then went close minutes later only for his shot to be snuffed out by Hamdi Kasraoui who was quickly off his line, before Raidi Jaidi was needed to make a desperate headed clearance to deny Flavio a chance from a cross.

Tunisia then hit back just before half time when Kamel Zaiem struck a 30-yard pile driver that forced Lama to acrobatically parry and save before Chermiti could capitalise.

The pace slowed considerably at the start of the second half as the whistles and trumpets of the sparse crowd scattered around the Tamale Sports Stadium failed to increase the tempo of the game.

Flavio lifted things on 56 minutes when he cut in from the right flank and passed along the edge of the area to Manucho, who swivelled to set up Maurito's crashing 20-yard shot which went straight at keeper Lama.

But much of the play was dominated with patient passing, especially where the five-man Tunisian midfield were concerned, rather than gut-busting attacking football.

With 20 minutes left to play Angola's Gilberto summed up the apathetic atmosphere that had descended on the game with a thirty-yard free kick struck so softly at Kasraoui in the Tunisian goal, it could have been mistaken for a pass.

The only further action came when Flavio spurned Angola's best chance of the game with only injury time remaining, when he sprinted clear of his marker but shot tamely at the keeper from 15 yards.