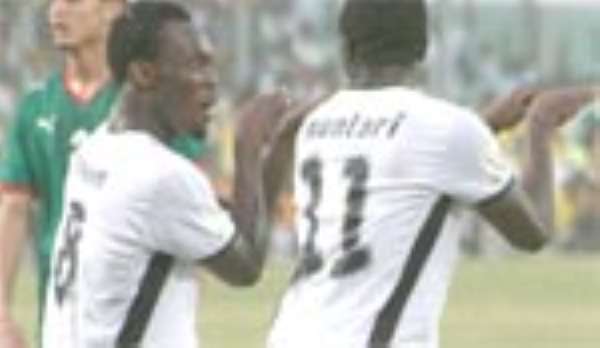 Despite the predictions of doom and gloom by many doubting Thomases, the Black Stars of Ghana seem to be cruising in the 26th MTN Africa Cup of Nations, beating the Atlas Lions of Morocco 2-0 at the packed Ohene Djan Stadium in Accra to qualify for the quarter-finals of the competition.

The Ghanaians were a delight to watch yesterday as they hammered the Atlas Lions, who failed to go beyond the group stages after beating Namibia 5-0 in their opening encounter last week.

Chelsea's Michael Essien showed why he is the most expensive player in Africa for close to two years running, standing out as the best of the best, and in the end, it came as no surprise when he emerged the Man-of-the-Match.

Right from the blast of the referee's whistle, the Black Stars, led by Skipper John Mensah gave every indication of carrying the day, as Sulley Ali Muntari and Essien dominated the midfield, with Anthony Annan, who replaced Laryea Kingston, making up the triumvirate.

Essien scored the first goal in the 26th minute from a Muntari free-kick before aiding the other goal scored by Muntari in the 45th minute.

Without a doubt, this was a match the Black Stars displayed magnanimous football which must be credited to a tactical and technical strategy employed by Coach Claude Le Roy.

All the gallant players who wore the national jersey displayed great character on the field of play with new addition, Anthony Annan of IK Start being the unsung hero of the team.

Annan, who showcased a lion's heart in his first Nation's Cup appearance, marshaled the defensive midfield, leaving Essien to play in a more offensive midfield, where he worked like a loom.

The Moroccans were totally anonymous on the field of play with occasional threats towards the Black Stars' territory.

Their attack, made up of Hadji Aboucherouane, Chamakh and substitute Tarik Sektioui were totally outplayed by the Ghanaian defenders of Skipper Mensah, Eric Addo, John Paintsil and Adu Sarpei, who was phenomenal in the game.

Essien opened scoring when he connected Sulley Muntari's free-kick past the advancing goalkeeper into the Moroccan net.

After the goal, Asamoah Gyan who was very busy on the day, saw his shot from a solo effort missing the goal post by inches in the 29th minute.

In the 41st minute, Muntari scored his second goal of the tournament when he netted Ghana's second of the day. Scores at the end of the first half remained 2-0.

The second half, which started on a whirlwind fashion, saw the Moroccan's coming into the picture briefly when Aboucherouane's shot was saved by Kingson.

From then onwards, the Black Stars took over and dictated the pace but luck eluded them.

Twice in the 54th and 82nd minute, Junior Agogo saw his shots after solo runs being saved by Nadir Lamyaghri.

Quincy Owusu-Abeyie's shot and Asamoah Gyan's header in the 67th and 72nd minutes respectively were both saved again by Lamyaghir.

Dede Ayew, Baffour Gyan and Haminu Dramani came on for Junior Agogo, Asamoah Gyan and Draman respectively in the 77th, 87th and 88th minutes in that order.

Much as the Ghanaians tried, they could not increase the tally, leaving the scores 2-0.

This victory means the Black stars have qualified for the quarterfinals of the competition with a 100 percent record.

Guinea qualified alongside Ghana from Group A after playing a 1-1 drawn game with Namibia at the Essipon Sports Stadium near Sekondi yesterday.

Souleymane Youla scored Guinea's opener on 62 minutes when he slotted home a through ball from Mamadou Dioulde Bah.

Brian Brendell earned Namibia their first point of the tournament when he cut in from the right to finish inside the left-hand post.

Guinea's point means they finished second in the group with four points.

Ghana would therefore face the second-placed team in Group B, which comprises Cote d'Ivoire, Mali, Nigeria and Benin, while Guinea faces the winner of the group.
By C. N. Yeboah