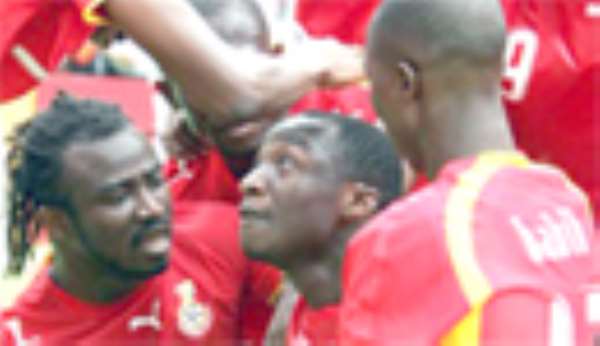 CHRISTIANS ALL over the country exemplified their sense of patriotism as they yesterday stormed their various worship centers in their Ghana 2008 paraphernalia to pray for the success of the national team, the Black Stars in the Africa Nations Cup tournament.

The worshippers dressed in various paraphernalia designed exclusively for the tournament while others who did not have the 'Ghana '08' wares had to make do with those they used during the [email protected] celebrations.

DAILY GUIDE visited some of the churches and the euphoria exhibited indicated that this tournament would be a 'do-and-die' affair when the Black Stars lock horns with their Guinean counterpart in the opening ceremony.

At the Queen of Peace Catholic Church in Madina where the Red, Gold and Green with the Black Star were the dominant colours, Very Rev. Fr. Nilan Coln led parishioners to pray for a successful tournament and good health for the playing teams, especially the Black Stars.

For his part, Rev. Samuel Victor Mpereh, Acting Superintendent Minister of the Madina Circuit of the Methodist Church said they prayed for God's perfect will be established and also against any confusion and conflict that might take away the colour out of the football fiesta.

He mentioned that each of the societies in the church had been tasked to bring a television set each so both members and non members of the church could watch the match.

The idea, according to Rev. Mpereh, is to enable the church to use the occasion to evangelize to non-believers during the break-in-point (end of the first half) of the game.

He observed that the way Ghanaians celebrated the World Cup held in Germany last two years was alarming, and therefore cautioned against any excesses such as motor riding, driving at top speed and sitting on top of vehicles that might lead to death.

The Senior Pastor of the Madina Central of the Assemblies of God Church, Rev. Richard Osei-Asante also noted that every year, the church devotes part of the year for prayers and fasting and that coincidentally, the tournament fell within their fasting period.

He noted that the football fever has caught up with the church members that it would be out of place to put programmes in the evening, saying all of their evening programmes had been rescheduled so soccer fans could watch the matches.

Rev. Osei-Asante indicated that the church prayed for trouble-free and peaceful tournament at all the centres.

The Senior Minister advised Ghanaians to support the Black Stars and pray for their success.

Rev. Osei-Asante pointed out that there are foreign nationals like Nigerians in the church who are married to Ghanaians, and noted that the day the Black Stars would be playing against the Super Eagles of Nigeria would be a very hard one for members of the church as there would be divided loyalties.

He therefore advised that spouses in that situation should accept the score line, whether they lose or win.

At Ashale Botwe near Madina, the Priest in charge of the St. Francis Assisi Catholic Church, Rev. Fr. Guy Amedee, who is an Ivorian, said Ghana has achieved a lot and the hosting of the tournament was a demonstration of that achievement.

Fr. Amedee, who was dressed in one of the Black Stars T'shirts with his Ivorian miniature flag, said the tournament was about Africa, and therefore called for a friendly atmosphere where visitors from all parts of the world would feel welcomed.

“We're all Africans and as Africans the tournament will come and go but we shall still remain Africans. That is why it is important we stay united whether we win or lose,” he stressed.