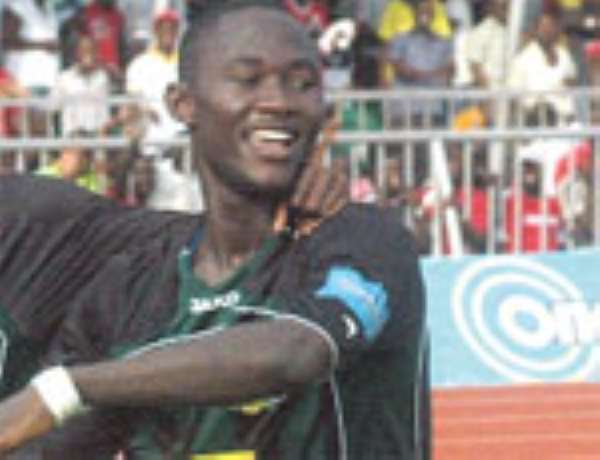 Eric Bekoe, Kumasi Asante Kotoko's talismanic player and leading goal scorer in the Onetouch Premier League is expected to be included in the 27-member Black Stars team that will embark on a 10-day training in Dubai, the United Arab Emirates, next week.

The hit man, who has 7 goals to his credit, scoring three of the goals within the first 5 minutes of the matches played so far by Kotoko, is the most enterprising player and fearful attacker on the local scene today.

According to an FA Scribe, if Bekoe maintains his goal-scoring prowess in the next two matches to be played within 7 days, he could be heading to UAE with the Black Stars.

Though most of the strikers invited by Coach Claude Le Roy, including the Gyan brothers, Joe Tex Frimpong, Junior Agogo, Matthew Amoah and Chris Dixon of Charlton Athletic in the English Division One league, are expected to give the coach some headache in choosing the strikers for the competition, Bekoe may sail through.

He is noted for dazzling and mesmerizing opposing defenders and since his days with Liberty and Heart of Lions, the young striker is noted for banging in goals with cheeky ease.

He has been influential in Kotoko's success so far, an elated Jerry Asare, Kotoko's Director of Operations told a section of the media after a recent game.

Kotoko have always struggled during the beginning of previous league seasons but Bekoe's presence has changed the fortunes of the Porcupine Warriors this year, Mr Asare said with joy.

This sentiment was shared by Coach Bashiru Hayford whose technical direction has enabled the youngman to bang in many goals.

Until last Sunday when Kotoko failed to score and apparently lost their first league match to AshGold, Bekoe has been scoring in all the matches, banging in 3 goals (first hat-trick of the season) past Olympics at the Baba Yara Sports Stadium.