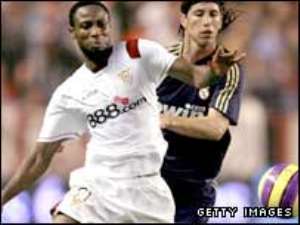 He struck for Sevilla after 19 minutes, picking up a loose ball in midfield before thundering a 30-metre half-volley past Iker Casillas to help his side to a shock 2-0 victory over Real Madrid.

Racing Santander had Burundi striker Mohamed Tchite to thank for their 1-1 home draw with Espanyol.

Tchite's 55th minute strike looked to have given the home side all three points but Espanyol equalised with a last-minute penalty.

In England, Zimbabwe's Benjani Mwaruwari solidified his position as the league's top scorer with his eighth top-flight goal of the season in Portsmouth's 4-1 win at Newcastle United.

Nigerian Yakubu Aiyegbeni was also on target as Everton won 3-1 at home to Birmingham City.

Ghanaian Matthew Amoah scored the only goal of the game to give NAC Breda victory at Utrecht.

A goal from Morocco's Nourdin Boukhari could not prevent Sparta Rotterdam going down 4-3 at Excelsior.

Ibrahim Kargbo of Sierra Leone scored for Willem II Tilburg as they lost 2-1 at home to newly promoted VVV-Venlo.

France
In the French Ligue 1, AS Nancy's Congolese star Chris Malonga scored the goal as his team saw off Girondins Bordeaux 1-0.

Mali's Adama Coulibaly and Ivory Coast's Aruna Dindane both scored as Racing Lens came back from 2-0 down to win 3-2 at home to St Etienne, Dindane notching the winner five minutes from time.

FC Brussels could not recover from the Zola Matumona affair as they were beaten 4-0 by Mechelen.

However Brussels played with his fellow Congolese Jean-Pierre Eale Lutula and Cameroon's Arnaud Sutchuin Djum who came on with five minutes remaining.

Two of the Mechelen goals were scored by Cameroonian Aloys Nong.

Brussels are second from bottom in 17th position.

There were African goals elsewhere: Zimbabwe's Honour Gambami scored the second goal for Cercle Bruges which was his sixth of the season.

Another Zimbabwean Cephas Chimedza also found the back of the net twice from the penalty spot in the second-half as his side St Truiden came from behind to beat Gent 2-1.

Both goals have taken Chimedza's tally to three goals.

That's the same tally for Nigeria's Tosin Dosunmu, who equalised for Roulers to secure a point in the 1-1 draw with Beerschot.

The hat-trick took his tally to four goals but Academica are in 11th position.

Cameroonian striker Herve Tum scored the winning goal for Bursaspor in the 65th minute to give his side a 2-1 victory over Ankaragucu.

Nigerian Isaac Promise pulled a goal back for his side Genclerbirligi in the 79th minute in the 2-1 defeat to Denizlispor.