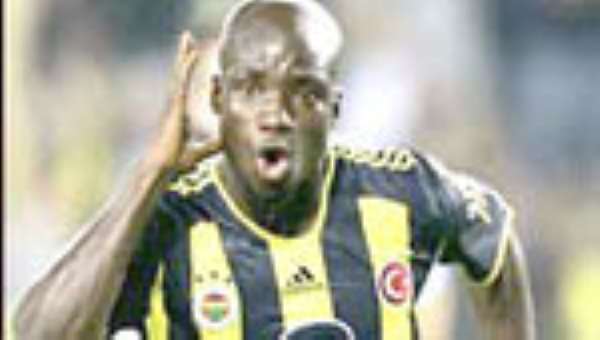 Ghana's captain Stephen Appiah excelled in his first full game since recovering from the knee surgery that kept him out of action for five months.

The 26-year-old played the entire duration of the game as his club Fenerbahce took the honours and points after running out 2-1 winners over Kasimpasaspor in the Turkish top league on Saturday.

The victory took the Turkish giants to fourth on the league table, three points adrift of leaders Sivasspor, who have one match in hand.

The mid-fielder has been used as a substitute, since his return from injury four weeks ago, to aid his recovery process.

His return is a major boost for Fenerbahce coach, Zico as he prepares the side to face arch rivals and third-placed Besiktas this week in one of the biggest matches of the Turkish football calendar.

The Brazilian legend paid tribute to the Ghanaian international after the gruelling encounter at the Ataturk Olimpiyat Stadium in Istanbul, Turkey.

“Our strategy of slowly introducing him to matches has worked to perfection and shows why he dominated the game.

“His level of fitness is perfect for the big game against Besiktas this week.”

Appiah's return to full fitness is also a boost to Ghana ahead of next year's MTN African Cup of Nations.
Stepapp

2020 Election Petition was about EC Chair’s declaration; not...
30 minutes ago