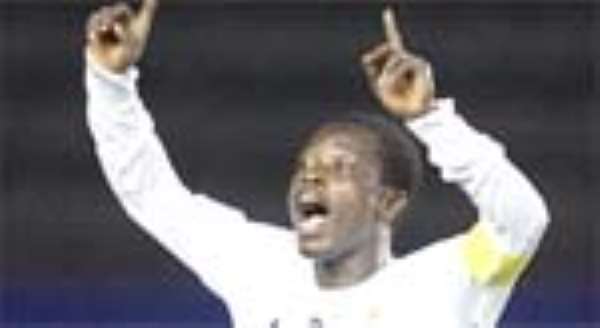 Captain of Ghana's Under-17 soccer team, Ransford Osei has indicated his preparedness to play for English Premiership Champions, Manchester United.

The youngster, who took the silver boot award at the last Under-17 World Cup in Korea, is convinced he would be joining the English giants soon, according to tribalfootball.com.

"I am moving to London and I'm going to play for Man Utd. I can say 90 percent has been done but it's left with a little," the 16-year-old striker was quoted as saying.

Osei's performance at the Under-17 World Cup in Korea last month drew the attention of Manchester United and French Champions, Olympique Lyonnais among others.

Readers would recall that two months ago, English Premiership side, Tottenham Hotspur as well expressed their readiness to sign the 16-year old.

Hotspurs' spying supremo, Damien Comolli had asked Osei to come to White Hart Lane after the tournament in Korea as he tried to win the race for the speedy 16-year-old striker.

Ransford Osei currently plays for Kumasi-based division one side, Kessben FC. He plays as a striker, and was the second highest scorer at the World Cup.

A poll on the Ghana Football Association website before the Korea tournament resulted in Osei being the player visitors expected most from in the World Cup.

The FIFA Under-17 World Cup, since its inception 22 years ago, has contributed in no small part to the discovery of great footballers like Ronaldinho of Brazil, Michael Essien of Ghana and Nwankwo Kano of Nigeria.