Essien, 2 Others For Best Player Award 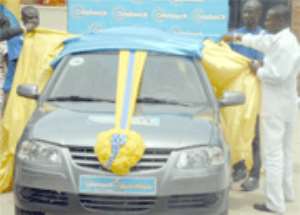 Essien has been shortlisted together with Kojo Asamoah of Liberty Professionals and Alhaji Sani of Ashantigold for the top honour of Onetouch Premier League Best Player that has a ¢350 million VW Polo car at stake.

The second Onetouch Premier League Awards gala will confer honours on players and officials in 14 award categories. And for the first time, the league's governing body, the Professional League Board (PLB) has introduced an award for the best employee of the Ghana Football Association (GFA) to motivate staff to work harder towards the development of the game.

PLB Chairman, Mr Welbeck Abra-Appiah, announced at the launch in Accra yesterday that eight out of the 14 award categories will be determined through 40 per cent public voting and 60 per cent by a technical committee, with the remaining six categories determined by a panel of experts.

The public will not have a hand in determining such awards as the Goal-king (Emmanuel Clottey of Olympics), Best GFA Employee, Highest Scoring Club, Champion Club (Accra Hearts of Oak), Fair Play and the Golden Award.

Tema Youth's 17-year-old Ekow Benson, who gained his first call-up to the Black Stars in the Ghana-Brazil international friendly in Sweden recently, is contesting the Discovery of the Year award with two equally talented players, Alhaji Sani of Ashgold and new goal-king Emmanuel Clottey of Oly.

Goalkeepers Ernest Sowah of Tema Youth, Isaac Ackon (Gamba All Blacks) and Joseph Addo (Sekondi Hasaacas) will be competing for the Most Promising Goalkeeper award.

Mr Philip Sowah, Chief Executive Officer of Onetouch, said his outfit considered every cedi spent on football as an investment and not expenditure to help create jobs for the youth.

He said it was part of the company's plans of giving back to society on which the company depended for survival.

GlobalAdvanti Limited, the marketing agency for the league, have introduced a novelty challenge match involving the best players in the northern and southern sectors at the end of every soccer season.

This clash would be incorporated into the GFA calendar to become an annual affair if ratified by the football controlling body.

The maiden Northern Sector-Southern Sector match has been fixed for the Dansoman Park but selection of the players into either team will be done by football fans within a week vie the Onetouch SMS short code 1913.