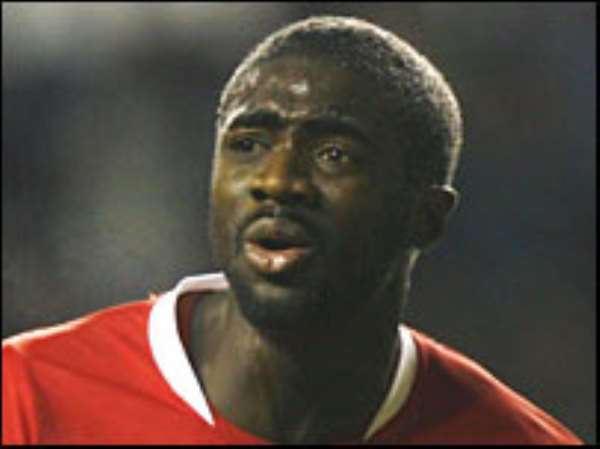 Nolan struck in the 50th minute when he collected Kevin Davies' cross-cum-shot and clipped the ball into the net.

The midfielder was denied a second when he had the ball expertly flicked from his feet by the diving Manuel Almunia.

Arsenal increased the tempo after that and the intense pressure told when Toure dived to meet a cross and bounced a header over Jussi Jaaskelainen.
It was the third consecutive season the teams had been dawn together in the FA Cup, with Arsenal winning the first and Bolton claiming the second.

And there was little to choose between them for much of the first FA Cup match to be hosted at The Emirates Stadium.

But in the air Bolton's Davies was superior and a major influence, until a blow on the foot needed a painkilling injection and it appeared to limit his leap thereafter.

It was a setback for Davies, who had brought a goal-line save from Almunia in the first minute after nodding downwards.

From a later cross, Ivan Campo should have done better when he volleyed over the bar.

As the half drew to a close Campo attempted to head back to Jaaskelainen but Thierry Henry intercepted the ball and almost scored with some breathtaking improvisation.

The Frenchman back heeled the ball on the volley and was only denied a superb goal by excellent defending from Abdoulaye Meite, who cleared the ball off the line.

That was the closest Arsenal came in a half which saw a confident Bolton dictate much of the play and have the better chances.

And it took only four minutes after the restart for Bolton to accept a well-worked opportunity.

One-touch football took the ball out wide to Davies, whose shot across goal was controlled by Nolan and then thumped into the corner of the goal.

Nolan almost scored again shortly after but Almunia superbly stretched out an arm to flick the ball away from the Bolton player's feet.

Arsenal responded with some slick passing which ended in Theo Walcott volleying off target from the right side of the box.

And it sparked a lengthy spell of intense Arsenal pressure but Jaaskelainen proved equal to a shot by Toure and later saved at the feet of Henry.

The Bolton keeper also did well to block a swerving Cesc Fabregas shot from distance.

But there was little Jaaskelainen could do when Toure dived in at the far post and bounced his header over the Finnish keeper.

Arsenal boss Arsene Wenger:
"It was a bit unfortunate that we went 1-0 down as in the second half we were on top of the game.
"We are used to going behind here at The Emirates but we always find the resources to come back.

"But today we lacked the ability to score a second goal and kill the game off - we had the chances. But Bolton's keeper and defenders played very well."

Bolton coach Ricky Sbragia:
"We went one up and for the next half an hour we were under severe pressure and we folded in the end.
"But in the end to get a draw and take them back to our place is a great result for us.

"We needed a second goal but we didn't get it. Nolan was unlucky but their keeper did well to save from him."