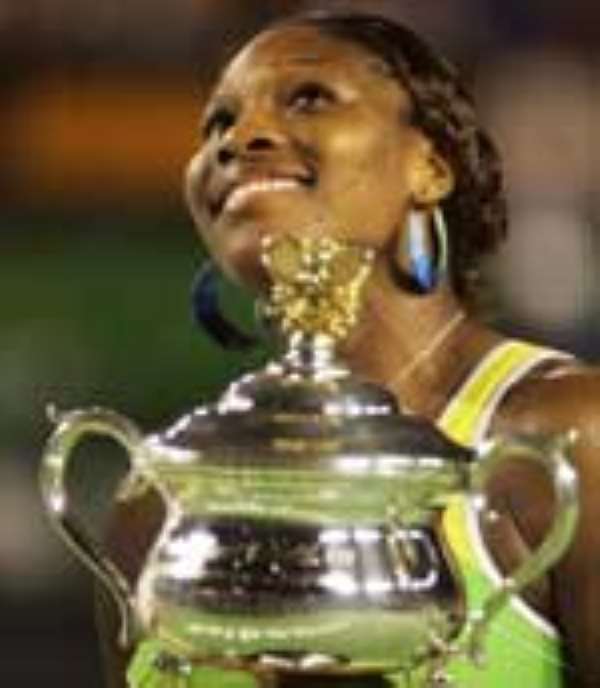 Serena Williams lifted the Australian Open title for a third time as she proved far too powerful for Maria Sharapova.

The unseeded American needed just 62 minutes to record a 6-1 6-2 victory in Melbourne and claim her eighth Grand Slam crown.

The 25-year-old made a mockery of her world ranking of 81 going into the tournament with an assured display of power tennis.

Williams set the tone for the one-sided contest by breaking Sharapova's opening service game.
The Russian eventuallly managed to get on the board to make it 5-1, but it was only delaying the inevitable as her opponent went 1-0 up on her second set point.

The second set continued in the same fashion as Sharapova opened the first game with a double fault before Williams broke again with a stunning winner down the line.

Sharapova had a chance to break back in the next game but Williams held firm and then raced out to a 4-0 lead.

The 2003 and 2005 champion made it a hat-trick of wins Down Under on her own serve, finishing it in style with a crunching backhand winner.

"This one's right up there with the top," Williams, who dedicated the win to her sister Yetunde, who was shot dead in 2003, said.

"It was an awesome win because I had so many critics, so many people talking bad and saying negative things and saying I wasn't fit when I felt that I was really fit and could last three sets and two-and-a-half or three hours no worries."

Williams becomes the second unseeded player in the professional era to lift the title following Chris O'Neill's success in 1978.

Sharapova does have one crumb of comfort in defeat in that she will be world number one when the updated rankings are released next week.