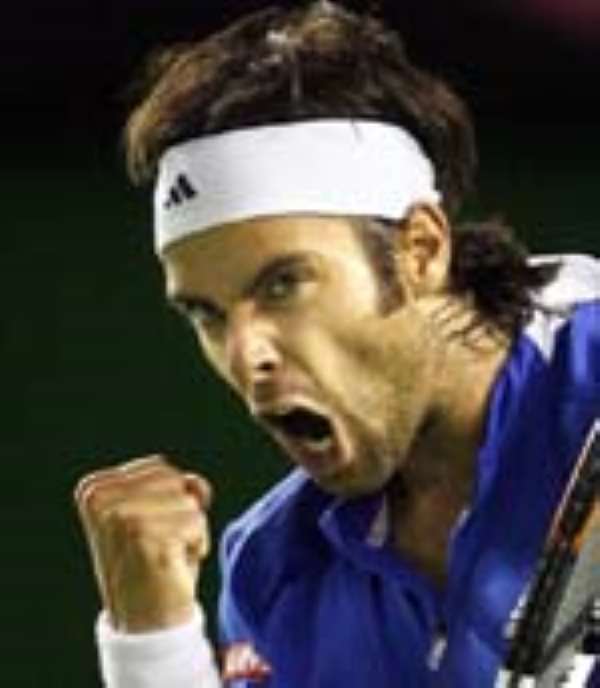 Fernando Gonzalez produced the best performance of his career to beat Rafael Nadal in straight sets and reach the Australian Open semi-finals.

Gonzalez got his tactics spot on as he thrashed the world number two 6-2 6-4 6-3 to set up a semi-final meeting with Germany's Tommy Haas.

The Chilean, who has already accounted for home favourite Lleyton Hewitt, never gave Nadal time to settle as he bossed the match from the baseline.

His accurate first serve, drawing on the evidence from Andy Murray's fourth round battle with the Spaniard, regularly forced Nadal out wide and opened up the court, enabling Gonzalez to hold serve with unexpected ease.

And his booming forehand hurried the second seed, forcing errors from Nadal while also bringing Gonzalez 41 winners in just two hours of tennis.

Coupled with a tally of just 16 unforced errors, the statistics highlighted the effectiveness of the underdog's performance.

The match had not started well for Gonzalez, who looked tentative in the early exchanges, frequently caught on the backhand, which he used to take the pace out of the play, although not to great effect.

However, his confidence was boosted when he saved a break point in the fourth game and he then forced three consecutive break points against the Nadal serve in the next game, converting the third.

The 10th seed began to enjoy himself as he ripped through his service games and a second break enabled him to take the first set 6-2.

He carried his momentum into the second set, breaking in the first game when Nadal netted with a forehand and then holding serve to win seven consecutive games.

The French Open champion seldom threatened to break back, and Gonzalez took the set at the first opportunity.

Nadal attempted to take the heat out of the game by calling for treatment at the end of the second set, but the ploy failed to break up his opponent's rhythm.

A stunning cross-court forehand winner gave Gonzalez a break in the fifth game and he broke again - for the fifth time in the match - to seal his place in the semi-finals.
SOURCE:
DILASO(SPIRITS FM,AMSTERDAM)