WILLIAMS FIGHTS BACK TO LAST FOUR 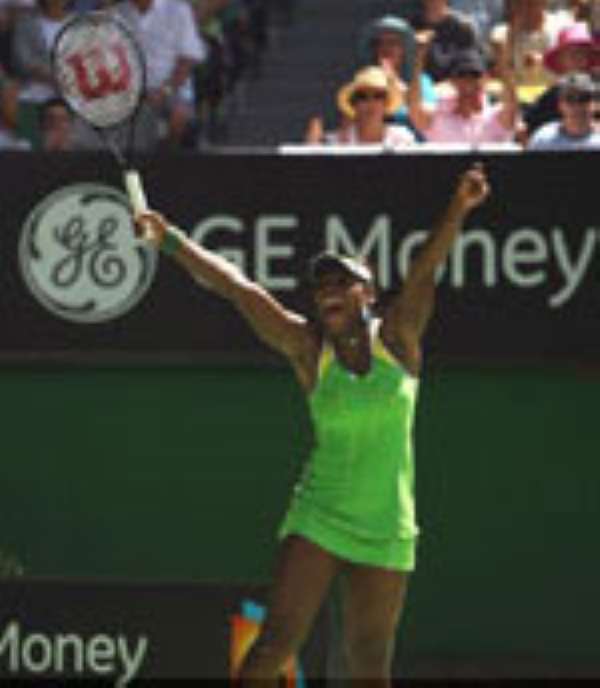 Two-time Australian Open champion Serena Williams is through to this year's semi-finals after coming from behind to beat Israeli 16th seed Shahar Peer 3-6 6-2 8-6.
Williams, who won at Melbourne Park in 2003 and 2005, will take on 10th seed Nicole Vaidisova in the last four after her victory over Czech compatriot Lucie Safarova.

It could all have been so different though, if Peer had been able to serve out the match in the third set.

But having fought back from a long injury lay-off to make the tournament, Williams was brimming with pride after her display on Tuesday.

"I am the ultimate competitor," Williams declared after the win.

"I wasn't playing my best tennis, I'm excited I was able to come through, I wasn't the best I can be."

Playing in her first Grand Slam quarter-final, Williams' opponent sauntered into a 3-0 lead in the match, as the more experienced competitor failed to shine.

At 4-1 down, Williams began to find her rhythm though, and while it came too late to save the first set, she battled against the heat to overwhelm her 19-year-old opponent 6-2 in the second set.

The third looked to be heading the same way, before Peer fought back to level at 4-4 and undaunted by the pressure, had the chance to serve out the match with a 6-5 lead in the third.

Boosted by the save though, Williams, currently ranked 81 in the world, came back to win and is the sole American woman left in the draw for the semi-finals.

Her opponent is the winner of the Czech teenagers Vaidisova after a comfortable 6-1 6-4 victory over unseeded Safarova.

The 17-year-old 10th seed dominated against Amelie Mauresmo's conqueror and was delighted with the win.

"It feels great, I'm so happy I'm through," Vaidisova said.

"It's great for Czech tennis to have two [players] in a quarter-final and you don't want to play your friend but I'm happy."