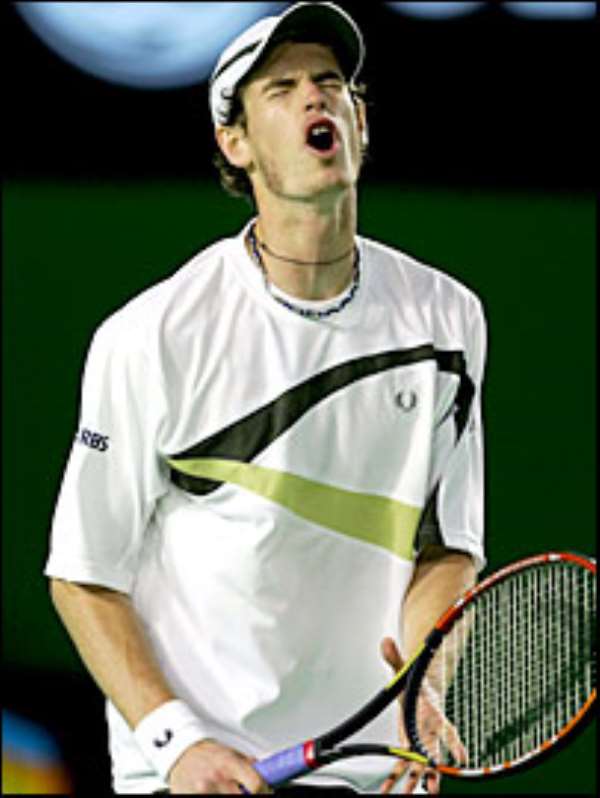 
Murray pushed Nadal all the way until the final set
World number two Rafael Nadal held off a lion-hearted performance from Scotland's Andy Murray to reach the Australian Open quarter-finals.

Murray claimed an enthralling opening set on the tie-break, but dropped off the pace as Nadal won the second set.

The Scot won the next set but paid the price for not converting break points as Nadal took the fourth and fifth.

The players' body language at the start of the match made for fascinating viewing as they came together at the net like two boxers receiving their instructions before a title fight.

Nadal was a bundle of energy, jogging on the spot as he tried to make eye contact with his opponent, while Murray looked nervous and avoided the Spaniard's gaze.

But when the action got under way at the Rod Laver Arena, Murray stood toe-to-toe with the French Open champion.

Every service game was held in the opener, although Murray did have to save one break point before forcing the tie-break.

And Murray rose to the challenge brilliantly as he took it 7-3 thanks to an awesome serve and two correct Hawkeye challenges.

Both players went for a "comfort break" at the end of the set, but it was Murray who looked the more comfortable on their return as he held the next game to love.

Nadal had too much strength for Murray in the final set

Murray went from strength to strength as he secured a break to claim a commanding 4-1 lead.

But Nadal, far too good a player to stay in the doldrums for long, suddenly found his best form, winning the next five games in a row to turn the set on its head.

Murray's serve fell apart as he seemed to struggle with a side strain.

And his malaise carried over to the start of the third set as two double faults in succession handed Nadal another break and a 3-1 lead.

But with his prospects looking bleak, Murray turned things around in astonishing style as he broke back before snatching the set with another break in the 10th game.

With the clocks ticking well past midnight in Melbourne, a rejuvenated Murray held serve twice

606: DEBATE
No disgrace in Murray losing to the world No.2, especially as he took 2 sets

But a crucial turning point came in the fourth game of the set as five break points came and went for Murray, allowing Nadal to hold for a vital psychological
boost.

Nadal took full advantage of the let-off, breaking twice to set up a final-set decider.

The fifth set proved a let down for Murray and his enthusiastic band of followers but it could have all been different had Murray managed to convert the break points that came his way.

Instead it was Nadal who took his chances on Murray's serve to give a cruel twist to the scoreline which the 19-year-old's brave performance did not deserve.