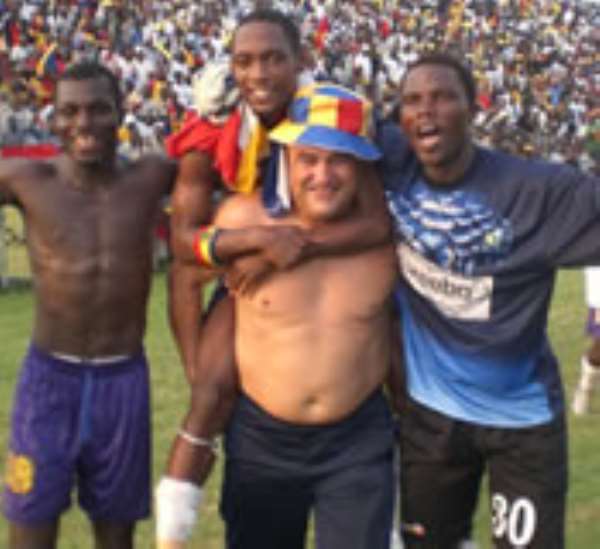 Accra Hearts of Oak at the weekend proved their solitary 1-0 victory over archrivals, Kumasi Asante Kotoko on Christmas eve was no fluke when they confirmed their superiority over the Oseikrom team in recent times, notching a 3-1 win in their 16th week Onetouch Premier League clash at the Robert Mensah Sports Stadium, to record what can aptly be described as “Phobian Joy and an Unimaginable Fabulous Anguish”.

In a match that was high on drama, but low in beauty, especially after repugnant scenes were created following the red card showed Asante Kotoko's Ivorian import, Ahmed Toure for fouling Hearts shot-stopper, Laud Quartey, it was the Phobians who comparatively looked better organized than their opponents, who in a pre-match boast had sworn to exact revenge for their first round loss.

Driven by the passion to exact revenge, Kotoko started the game on a very strong note, but ran out of steam after the first quarter. And having kept their cool during the Kotoko strong kick off, Hearts of Oak took over the game, showing much industry, and no wonder before the interval, they had horsed into an emphatic 2-0 lead, leaving their opponents completely distraught.

The red card Toure attracted is the second for Kotoko in a matter of two weeks. It would be recalled that in the first round clash, a Kotoko defender, Murtala Mohammed was shown the red card for a crunch tackle on an opponent. It was an incident many Kotoko fans believe contributed immensely to their club's 1-0 defeat in the first round.

Toure's red card incident in the game suggests the management and technical team of Asante Kotoko have got to deal with ruthless efficiency what appears to be a couple of indisciplined players in their fold thirsty for red cards.

Ahmed Toure's attraction of the red card sparked bagged water-throwing from the stands by angry Kotoko fans, who could not bring themselves to understand why referee Seidu Bomison showed the Ivorian the red card when his attention was drawn to the incident by one of his assistants, Dauda Ouadrago.

Instead of coming across as a bunch of wise followers of a club that had stamped its authority on the game, Hearts of Oak fans took a cue from the disgusting acts of their Kotoko counterparts, joining in the throwing of bagged water, making the game shudder to a halt for 15 minutes.

Once sanity prevailed, the Phobians showed they had not lost their composure and focus on the game, when Eric Gawu, who had endured a lot of pressure following his inability to replicate his performance at King Faisal on joining Hearts, put the Phobians ahead with a stupendous goal, after teasing Mohammed Alhassan out of his post, and lobbed the ball over him.

A few moments to the end of the first half, Bernard Dong Bortey, proved he is not washed up after all, when he embarked on a move, which saw him making nonsense of an Osei Kwame (Junior) challenge before flighting the ball into the vital area of Kotoko where John Cudjoe in a bid to smother the danger caused a defensive howler to extend Hearts' lead.

Back from recess, Hearts of Oak did not take their foot off the accelerator, as they continued to pile pressure on Kotoko, which rather lasted for a short while.

Not to be outdone, the fabulous boys also replied with the efficiency they could muster, and in one of such instances, Baby Rooney, Kwame Obeng Darko reduced the tally for them, after connecting a Kobina Dodzie cross.

The goal seemed to have given the fabulous lads the elixir needed to change the tide, as they kept laying siege in the area of Hearts of Oak in droves with the view to getting the equalizer.

This was at a time back-to-batan midfield whiz kid, Stephen Oduro appeared to be getting into his dribbling elements, while the Phobians found themselves in complete tatters, as though a spell had been cast on them.

Amazingly and against the run of play, the Phobians seemed to have popped out of their listlessness, with Eric Gawu ruefully missing narrowly.

The Phobians even have an outstanding game against Tema Youth, which would be honoured after a January 16, 2007 hearing and possibly ruling by an Accra High Court.

At the Len Clay Stadium at Obuasi, homesters, Ashgold forcefully drummed home their home invincibility when they strolled over visiting Sekondi Hasaacas by 2-1 with Opoku Agyeman and Alex Asamoah netting the goals for them in the first half before Hasmal pulled one back in the second half.

At the Kpando Park, Heart of Lions who initially seemed to have lost a chunk of their monstrosity when they came face to face with Tano Bofoakwa, who raced into the lead through David Sarkodie in the 10th minute.

But the Lions roared in the second half and deservedly won the game after fighting ferociously to win 2-1 with goals coming from Ibrahim Suleman and David Azumah in the 55th and 87th minutes respectively.

The Berekum Golden City Park continues to be the waterloo for visiting teams, as Liberty Professionals fell flat to local Berekum Arsenals with James Boadu proving lethal for the umpteenth time this season, scoring a stupendous goal in the 60th minute.

At the Swedru Park, an 87th minute goal by Bismark Ayidan made Swedru Gamba All Blacks three points richer at the expense of relegation bound, Power F/C, while Real Sportive also clung onto a 55th minute goal by Mohammed Gafaru to carry the day, making Goma Fetteh Feyenoord their casualties.

In their match at the Sunyani Coronation Park, King Faisal exacted revenge when they beat Real Tamale United 2-1, with Edmund Owusu Peprah and Ofosu Mikky scoring the goals for Faisal while Alhassan Weah secured the consolation goal for Real Tamale United.