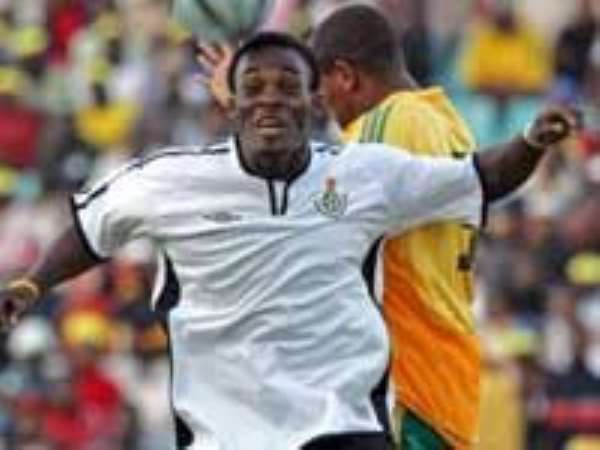 Michael Essien has won the 2006 BBC African Footballer of the Year.

In a live public vote Essien received nearly twice as many votes as Ahly and Egypt playmaker Mohamed Aboutrika and Ivory Coast striker Didier Drogba to win the award.

For the first time in the history of the award, the winner was decided during the BBC World Service's African sports programme, Fast Track.

The BBC award takes into account the football calendar from January to December 2006 and includes domestic leagues, both the Uefa and Caf Champions League tournaments.

The African Nations Cup, the World Cup and the World Club Cup are also included within this period.

Here is what was said:

GMT 1605 I vote for Mohammed Abou Trika because of his goals for Egypt and helping Ahly retain their title as the African Club Champions. Ibrahim Ceesay in Freetown

Fans in Nigeria with reporter Oluwashina Okoleje were unanimous they wanted a fellow West African. One fan said: "Didier Drogba - because he's consistent and he is the Premiership top scorer."

Moses Dossi - former Sports Minister in Malawi and former Fast Track reporter, told the programme that Drogba is his man. But another fan sitting alongside Mr Dossi said: "no way - AbouTrika is the man, he is the only one of the three playing in Africa so he gets my vote."

GMT 1630 Undoubtedly the best African midfielder, it has got to Michael Essien. B S Magashi, Benguema. Sierra Leone.

GMT 1635 Michale Essien because he is the live wire & engine room of the team . M Kudodah, Abuja

GMT 1636 Drogba and Essien are really in form for Chelsea, but I think Drogba has the edge with his crucial goals against big clubs. Mustapha Senghore, Gambia.

GMT 1637 Drogba is the best striker in Africa by far. Baboucarr Bah, Gambia.

GMT 1637 Aboutrika was instrumental for both club and country when they won CAF Champions League and Nations Cup in 2006. Chinedu Obediah, Bonny Island, Nigeria.

GMT 1642 Aboutrika deserves to win the award because he was outstanding in African competitions and even the Wold Club Championship. Friday Simon, Nigeria

Ivorian based reporter James Copnall says :"Drogba didn't have the best of World Cups, but his goals so far this season are a reason to count for him"

Ghanaian defendant of Michael Essien, Ibrahim Sannie says: "Essien showed his class at the world cup," he went on to say that his absence against Brazil in that World Cup for Ghana was a shame, but didn't ruin the midfielders competition.

GMT 1645 Essien because of his performance with Chelsea and he helps Ghana in the World Cup. Isaac Opoku, Liberia.

Inas Mazhar, defending the Egyptian star said "He plays for Ahly of Egypt, Ahly from Africa, he is not playing in Europe and that counts for him. He is the genuine African Footballer of the year" She also went on to say that he was the only one of the three who was involved in the World Club Championships.

GMT 1647 Essien has been the most solid African performer during the period. Football isn't all about scoring goals. Essien's the best by a mile and a half. Bowie Attamah, Lagos

GMT 1648. Michael Essien is the machine for Chelsea. He is the best. He now scores all the time and iscalm on the field. Tamba E Bundor,Sierra Leone.

GMT 1650Michael Essien deserves to win because he was inspirational for Ghana during the World Cup and has been outstanding for Chelsea this season starting and playin all games. Jeffrey Agyemang

GMT 1652 Essien because he is a real star player. Ibrahim, Lagos.

GMT 1655Aboutrika. Why? Because he has been a decisive trump card for Egypt in the African Nations Cup finals over the Ivory Coast