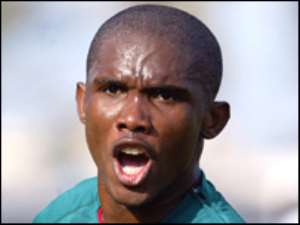 The Confederation of African Football's annual awards ceremony will take place in Accra on 1 March 2007.

The event was originally scheduled for Abuja, Nigeria, the venue for the last event. But a meeting of Caf's emergency committe in Cairo resolved to switch the venue to the Ghana capital.

South Africa and Nigeria have previously staged the ceremony during which the continent's best players are honoured.

Cameroon international striker Samuel Eto'o, who has won the Caf African Player of the Year for the past three years, is again one of the five nominees for the prestigious individual awards.

The ceremony will also crown the continent's best female footballer, the best team, best goalkeeper and best goal among other awards.