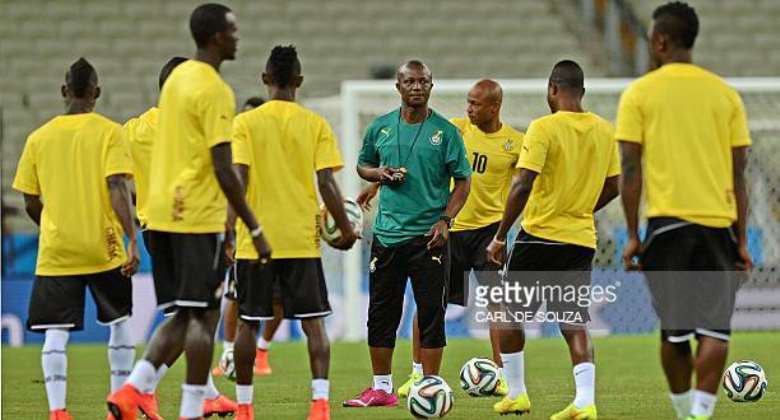 Ghana's coach Kwesi Appiah (C) takes part in a training session at the Castelao stadium in Fortaleza on June 20, 2014. Germany will face Ghana on June 21, 2014 in their second match of the 2014 FIFA World Cup in Brazil. AFP PHOTO/Carl de Souza (Photo credit should read CARL DE SOUZA/AFP via Getty Images)

Former Ghana coach, Kwesi Appiah has opened up on his decision for applying for the Black Stars' vacant coaching job.

Appiah is one of the few local coaches who have steered the team as the head coach.

The 63-year-old's second stint ended in 2019 after the Ghana Football Association [GFA] decided not to renew his contract.

Appiah led the team to the Africa Cup of Nations [AFCON] in Egypt where the team exited at the Round of 16 after losing on penalty shootouts against Tunisia.

Having applied for the vacant role, the Kotoko legend has been criticized by some section of football fans.

But according to him, though his application was indeed an afterthought, he was motivated to challenge the status quo after hearing that over 60 coaches had applied for the position without a single Ghanaian.

"Even though I had no intention of applying for the position, I later decided to do so just to correct the wrong impression that no local coach was qualified for the Black Stars job," he told Graphic Sports.

"All along I thought the GFA was headhunting for a new coach because I didn't hear any announcement inviting applications from interested coaches.

"So when I heard that many foreign coaches had already applied, I also decided to apply to put it on record that local coaches also have what it takes to handle the Black Stars," he stressed.

Meanwhile, the country's football governing body is expected to name a new Black Stars coach this month before the team assembles for their 2023 Africa Cup of Nations [AFCON] doubleheader against Angola in March.

It has been widely reported that Chris Hughton, who was named as the technical advisor has been named as the new trainer for the team.