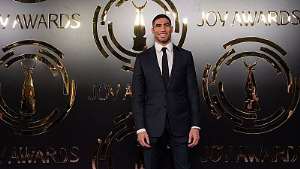 Morocco and Paris Saint Germain defender Achraf Hakimi has been named Arab Sportsman of the Year for 2022.

The 24-year-old fullback received the accolade at the Joy Awards in his country's capital Riyadh after a memorable year on the international and domestic stage.

Hakimi played a key role as the Atlas Lions reached the quarter-finals of the Africa Cup of Nations in January, before helping the North Africans to a record-breaking World Cup campaign.

Morocco, who had only once made it out the group stages at a World Cup prior to Qatar 2022, became the first African side to reach the semi-finals of the tournament before being eliminated by France.

Hakimi, who has 61 caps and eight goals to his name for the national side, scored four goals and registered six assists in 38 games in 2022 for his club side Paris St-Germain, who secured a record-equalling 10th Ligue 1 title last April.