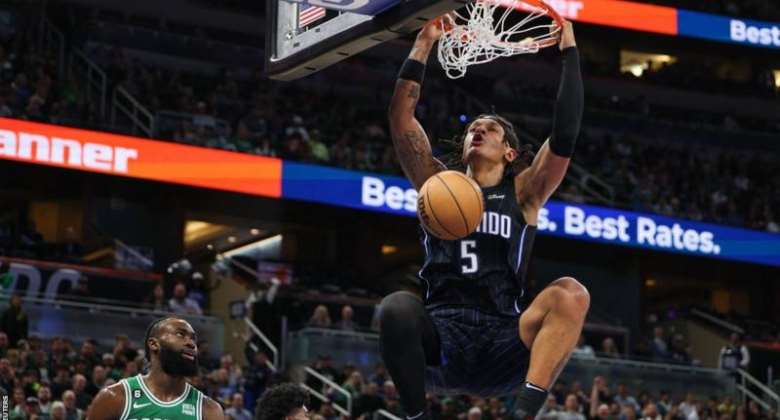 The Boston Celtics' nine-game winning run came to an end with a shock defeat by Eastern Conference strugglers the Orlando Magic.

The Magic, third from bottom in the table, won 113-98, as Paolo Banchero top scored with 23 points.

Jonathan Isaac also came off the bench for his first appearance since August 2020 after a serious knee injury.

"It felt fantastic, just to touch the floor. I feel so grateful," said Isaac, who scored 10 points on his return.

"I feel good, I'm grateful to be with the Magic, plus to get a win. I couldn't be happier."

Elsewhere, Damian Lillard scored 37 points and moved up to seventh place on the all-time three-pointers list as the Portland Trail Blazers beat the San Antonio Spurs 147-127.

Lillard scored seven triples to take his career tally to 2,283, moving ahead of Jason Terry in the standings and just seven behind sixth-placed Vince Carter.

Giannis Antetokounmpo returned from injury as the Milwaukee Bucks beat the Detroit Pistons 150-130.

Antetokounmpo had missed the last five games with a knee problem, with the Bucks losing three of those matches, but scored 29 points as they ran out comfortable winners.

"It feels good to be out there with the team again, play, run up and down, make some plays," Antetokounmpo said.

"Never take it for granted. Definitely just miss it, miss being around my teammates, miss playing basketball. I just missed being out there and competing."

Jalen Green scored a career-high 42 points as Houston Rockets ended a 13-game losing streak with a 119-114 victory against the Minnesota Timberwolves.