I am ready for WBO Featherweight title - Isaac Dogboe 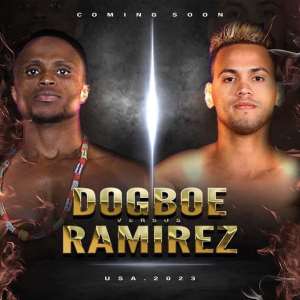 Isaac Dogboe has met the press in Ghana to inform them about his journey so far, and preparations towards his next mission.

The well-attended Press Conference took place on Wednesday at the African Regent Hotel where the former WBO Super Bantamweight Champion assured Ghanaians of victory on April 1st 2023 in the USA.

He said the championship bout against Robeisy Ramirez of Cuba who is a two times Olympic Games gold medalist would be promoted by Top Rank in Tulsa, Oklahoma, USA.

According to ‘The Royal Storm’, his next opponent is a legend and tough boxer, but he is not perturbed as he wants to face the best and beat them to rule again.

“I am very proud, emotional and inspirational to have the opportunity to fight for the world title again. I thank my team, we are prepared and ready to win again” he said.

Isaac Dogboe who is sponsored by Niche Cocoa was hailed by the President of the Ghana Boxing Authority (GBA) Mr Abraham Neequaye for his discipline and readiness to make a name for mother Ghana.

Mr Abraham Neequaye said boxing is still the number one sport in Ghana and urged the media to give boxers full publicity and mileage.

He thanked the Sports Writers Association of Ghana (SWAG) for recognizing the achievements of the GBA and adding them to the best five sports disciplines in the nation.

Mr Neequaye appealed to Ghanaian Boxing fans to pray for Dogboe on his next mission to win the WBO Featherweight title.

“Dogboe is the current eye of Ghana Boxing and everyone should pray for him to win” he expressed.

Communications Manager / PRO for Team Dogboe, Nana Akyere Agyako thanked the media for the support. She also commended Niche Cocoa and African Regent Hotel for all they do for Ghana's champion boxer.

Jeff, a representative of the National Sports Authority (NSA) also urged Dogboe to know that Ghanaians are behind him, so he should not relent in his training.

Present at the event to offer morale and entertainment were the Ghana Boxing Supporters Union (GHABSU).

Robeisy Eloy Ramírez Carrazana is a Cuban professional boxer. As an amateur, Ramírez won gold medals at the 2012 and 2016 Olympics as a flyweight and bantamweight respectively. His pro record is 11-1-0.

Dogboe who holds the WBO International title has a record of 24-2-0.

He was recently named best professional boxer for 2022 by boxinghana.com.

‘Sidelined’ GIJ threatens to withdraw from UniMAC merger
6 minutes ago