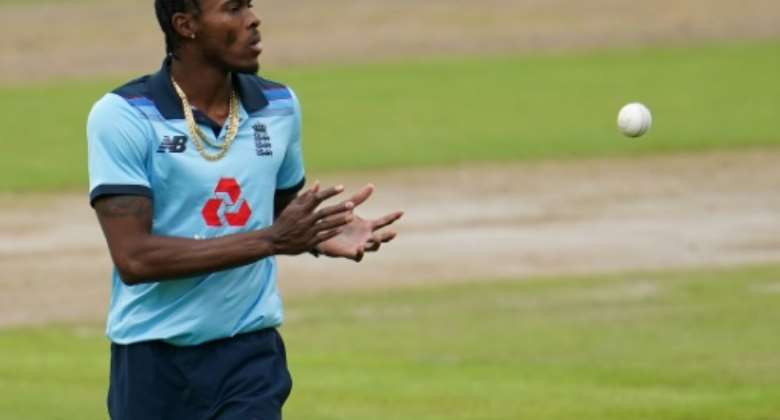 England's Jofra Archer has had an injury-blighted career. By Jon Super (POOL/AFP/File)

Jofra Archer is poised to make an eagerly-anticipated England comeback in the new year after being named Thursday in a 14-strong squad for a three-match one-day international series in South Africa.

Sussex fast bowler Archer made a dramatic entry onto the international stage in 2019 when he became one of the stars of England's 50-over World Cup triumph.

But he has not played international cricket since March 2021 due to injury.

The 27-year-old Barbados-born quick suffered several elbow problems, which led to two operations, before his hopes of a return to action were dashed by a stress fracture of the lower back in May that ruled him out of the 2022 English season.

Archer, however, played for the second-string England Lions in a warm-up match against the Test side in Abu Dhabi last month ahead of the senior team's 3-0 whitewash of Pakistan.

Just six balls into the practice match, Archer hit Zak Crawley on the helmet with a bouncer.

An England and Wales Cricket Board statement issued Thursday said Archer was "recovering well from an elbow injury and is expected to return to international cricket in South Africa next month".

Meanwhile, rising star Harry Brook, fresh from three superb Test hundreds in Pakistan and England's T20 World Cup win in Australia, has been called into an ODI squad for the first time.

The 23-year-old Yorkshireman has been a mainstay during an already busy England tour programme but team management have decided against resting him ahead of a Test series in New Zealand in February.

England's Harry Brook scored his third century in as many Tests against Pakistan in Karachi. By Asif HASSAN (AFP)

Outstanding batsman Joe Root and express fast bowler Mark Wood have though been left out, though, as England look to manage the workloads of their multi-format players.

Opener Ben Duckett, who played the last of his three ODIs in 2016, has been recalled to the 50-over set-up after regaining his England place at T20 and Test level in recent months.

Left-arm quick Reece Topley, unluckily ruled out of the T20 World Cup campaign after tripping on a boundary sponge, has also been included in a squad that will again be led by white-ball captain Jos Buttler.

But all-rounder Liam Livingstone has been ruled out with the knee injury he suffered on Test debut against Pakistan in Rawalpindi.

The three-match contest in South Africa is a rearranged series that was initially abandoned in December 2020 after a Covid-19 scare prompted England to fly home early.

It will be played over six days, with two fixtures in Bloemfontein starting on January 27 before the final game takes place in Kimberley on February 1.