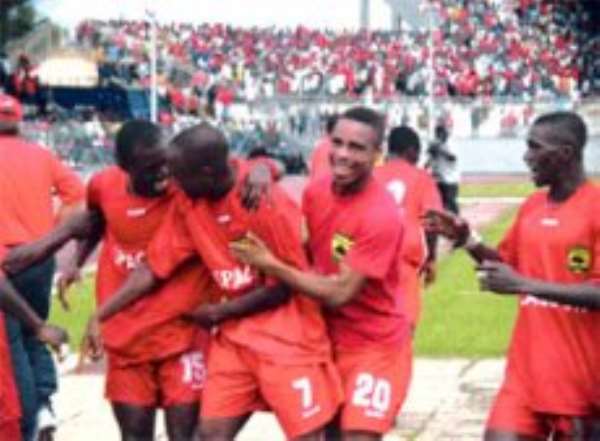 The final day of the 2006 league comes up this weekend as a host of clubs contest for the remaining two continental football slots available on match-day-XII.

Already, AshantiGold and Kumasi Asante Kotoko have secured places in next year's African Champions League competition as the table stands at least for now.

But Accra Hearts of Oak for now appear to have missed out of Africa's elite competition, the CAF Champions League, the first in a decade.

However, the Phobians stand a chance of picking a ticket for the Confederation Cup competition should the other two teams ahead of them falter.

Match-day-XII is expected to be keenly competed for with two available continental football places up for the taking.

The weekend's matches begin on Saturday at the Tema Park, where Accra Hearts of Oak would attempt to continue with their fine form recently in the league and vie for continental soccer action when they welcome Bofoakwa Tano to their home grounds.

A change is management by the Phobians on Thursday is not expected to dampen the spirits of the player but rather spur them on to victory.

The on Sunday, the weekend's epic encounter is at the Robert Mensah stadium in Cape Coast where Asante Kotoko welcome AshantiGold due to a one-match home ban imposed on them for crowd troubles.

Both sides have booked their places for next year's CAF Champions League competition but have everything to play for as the Porcupine Warriors strive to successfully defend their title while the Miners seek to win a major title after a decade of poor showing.

Both sides would be looking for a win when the kick off Sunday's round of games at 15:00GMT.

In Berekum, Arsenals who also stand a mathematical chance of playing in Africa play improving Real Tamale United at the Golden City Park.

The Swedru park would witness the local derby between Gamba All Blacks and Feyenoord Academy.

Two points separate both sides on the table with Feyenoord ahead on their local rivals on the log.

In Tema, another derby comes up with Real Sportive playing premiership debutants, Tema Youth who stand a good chance of qualifying for Africa should they carry the day.

At the Kpando park, Heart of Lions play Sekondi Hasaacas in a game that could go either way. The two sides all pegged at 15 points apiece.

King Faisal would take on Great Olympics at the Sunyani Coronation park.

Faisal, second from bottom have recorded some mixed results since they were deducted points and are bent on lifting themselves up the standings.

Liberty Professionals, whose inconsistencies continue to hamper their title ambitions wrap up the fixtures when they bottom placed, Power FC at the Carl Reindorff park.

A win for Liberty, who would be playing at home would certainly qualify them for continental football as they table stands for now.

AUDIO: We perform human sacrifices to get more gold, either ...
1 hour ago