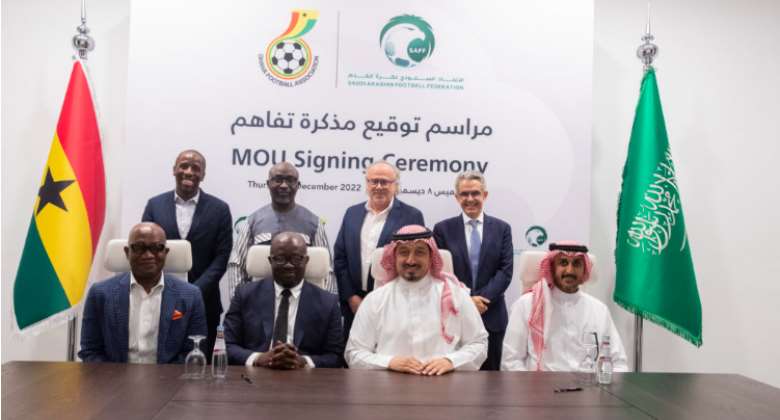 The agreement aims to develop strong relations between the two Federations to help the promotion, growth and success of football at all levels.

It provides a framework for collaboration across all areas of the game, from grassroots to elite football, including youth and women’s football. SAFF is committed to hosting both the Ghanaian men and women national teams for matches and training camps as well as exchanges for key experts across areas related to coaching, refereeing or administrative matter.

“The quality and talent in Ghanaian football is known across the world and we at SAFF are keen to work closely together to allow our youngsters to gain valuable playing experience while benefiting from their key insights and strengths. We look forward to working together in a meaningful manner and open up mutually beneficial opportunities,” he added.

"Ghana has a longstanding relationship with Saudi Arabia and it is only right that we expand this level of cooperation to football – an area that unites people”.

"Our brothers at the SAFF led by President Yasser Al Misehal have clearly demonstrated their desire to strengthen their football to reach the highest level and we also have the same vision so it is essential for us to partner in various areas of the game to achieve our aims and objectives." President Simeon-Okraku added.

The Kingdom of Saudi Arabia is one of the fastest-growing countries in world sports with football at its heart. Over 80% of the country’s 35 million population play, follow and attend football. The Saudi Arabian Football Federation has been implementing an ambitious strategy to grow the sport across the Kingdom and become one of the top 20 best football nations.

The men’s national team’s 2022 FIFA World Cup campaign was capped by a historic 2-1 win over Argentina.

Ghana also made a record 4th FIFA World Cup appearance in Qatar where the Black Stars were housed in Group H - Ghana lost to Portugal (3-2) and Uruguay (2-0) but registered a 3-2 win over South Korea in a tough encounter.

Established in 1956, the Saudi Arabian Football Federation (SAFF) is a member of FIFA and the Asian Football Confederation (AFC), and the governing body for football in the Kingdom of Saudi Arabia responsible for overseeing grassroots development and all aspects of the amateur and professional game.

SAFF is in charge of elevating Saudi football to new heights, offering new opportunities across the ecosystem and inspiring the nation to participate and become an influential force for good within world football. SAFF currently administers 17 competitions for a total of 600+ teams across various age groups, most notably the annual King’s Cup and Saudi Super Cup.

SAFF manages nine national teams ranging from the U-15 age group all the way to the first team, all of which compete in 23 regional and international competitions. As part of its significant investment in women’s football, it recently established the first women’s national team and league. It is responsible for the development and upskilling of over 3,000 national coaches and 1,700 referees across the Kingdom.

ABOUT THE GHANA FOOTBALL ASSOCIATION:
Founded in 1957, the Ghana Football Association (GFA) is the game's governing body in Ghana.

It is a representative democracy and is the umbrella organisation for all football clubs and other interest groups in the country.

The GFA is responsible for overseeing, promoting and developing Ghana football at all levels, from grassroots through to the professional game.

Our main objectives, enshrined in our statutes, are to develop football around the country, to organize domestic competitions and to protect the integrity of football (against match manipulation, doping etc.).

Our other aims are to deal with all questions relating to Ghana football and to promote football in a spirit of unity, solidarity, peace, understanding and fair play, without any discrimination on the part of politics, race, religion, gender or any other reason, to safeguard the values of the game, maintain relations with all stakeholders involved in Ghana football, and support and safeguard our members for the overall well-being of the game in the country.

By far Ghana's biggest and most important sporting discipline, our passion for the game in Ghana is driven by our desire for success on the pitch.

With this also comes our focus on developing youth talent while using the game to contribute to society.

GFA is composed of a number of political bodies (such as Congress and the Executive Council) and the administration. The highest political position is the GFA President, elected every four years by GFA’s members.

The GFA administration, with over 100 people from all parts of the country, is based in Accra. It is run by the General Secretary (CEO).