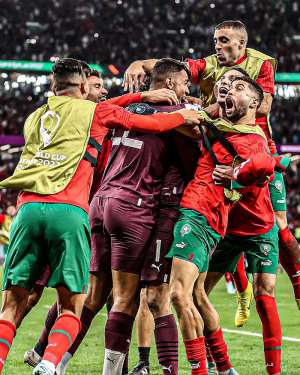 Morocco put up a spirited performance on Tuesday afternoon to cruise past Spain in the Round 16 stage of the 2022 FIFA World Cup.

The Atlas Lions after the win are through to the quarter-finals of the tournament being staged in Qatar.

They are also the only remaining African country in the 2022 FIFA World Cup.

In the game today, Spain had the edge over Morocco but could not play their game thanks to a compact defense of the North Africans.

Throughout the 90 minutes, the two sides struggled to create chances and failed to score before full-time.

While the game will travel into extra time to give the two sides the chance to score to win the game, they could not find the back of the net.

In the lottery of the penalty shootout, Morocco found a hero in experienced goalkeeper Bono.

The shot-stopper who plays his football in Spain made two stops to give Morocco the advantage.

With Pablo Sarabia failing to hit the target with his spot-kick, Spain lost the game 3-0 on penalties as Morocco sailed through to the last eight stage.

Abdelhamid Sabiri, Hakim Ziyech, and Achraf Hakimi netted the goals to give the Atlas Lions the historic win.

The three other countries to have achieved this feat include Cameroon, Senegal, and Ghana.