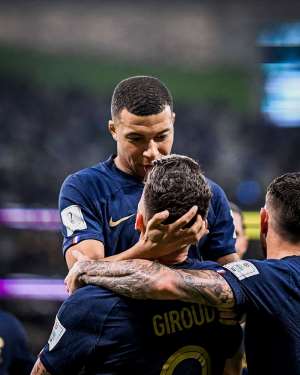 France have reached the quarter-finals of the 2022 FIFA World Cup in Qatar following an emphatic 3-1 win over Poland on Sunday, December 4.

The defending World Champions are aiming to retain the trophy and appear unstoppable, especially with poster boy Kylian Mbappé in scintillating form.

The PSG star started for his country today in the Round 16 match against a Poland side led by the dangerous striker and captain Robert Lewandowski.

In the exciting game, Olivier Giroud opened the scoring in the 44th minute to send France into the break with a narrow lead.

That equaliser assisted by Kylian Mbappé before halftime made the former Chelsea striker the all-time top goal scorer of France ahead of Arsenal legend Thierry Henry.

After recess, France continued to dominate the game while Poland tried to get back into the game.

Goals from talented attacker Kylian Mbappé in the 74th and 90th minutes respectively did not only give him a brace but cemented the win for France.

Thanks to the two goals, a strike from Robert Lewandowski in stoppage time only served as a consolation goal for Poland.

Eventually, France secured a 3-1 win to advance to the quarter-final stage of the 2022 FIFA World Cup.

The world champions will face the winner of the Round 16 game between England and Senegal later tonight.