World Cup 2022: Senegal 'must be ambitious' to beat England in last 16 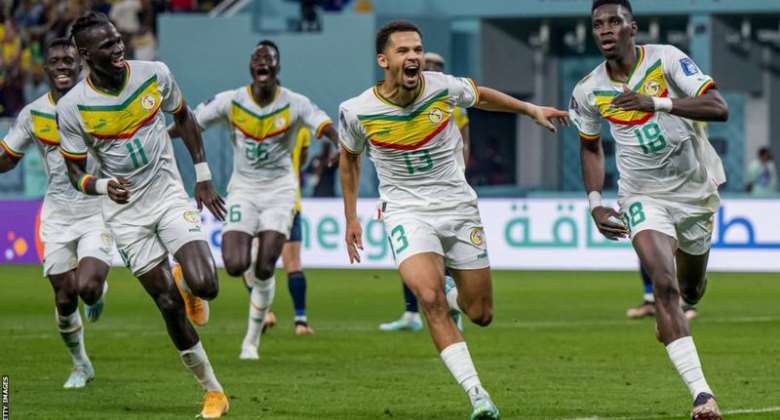 Senegal must stick to their attacking principles to beat England in the last 16 of the World Cup, according to former international Omar Daf.

The West Africans won their first continental title in February but will come up against a side which reached the World Cup semi-finals in Russia four years ago and then finished as runners-up at the European Championship last year.

Yet Daf wants the Teranga Lions to play on the front foot despite facing attacking talents including Marcus Rashford, who has three goals in Qatar, and 2018 golden boot winner Harry Kane.

"Senegal are the African champions so we must continue to be ambitious," the 45-year-old, part of the Senegal squad which reached the last eight of the 2002 tournament in Japan and South Korea, told BBC Sport Africa.

"Tactically, we will have to be very strong to beat this English team.

"The English are complete defensively, in the middle and even in terms of their offensive animation. But we have the weapons to continue this adventure."

The winners of the game on Sunday (19:00 GMT) will face either defending champions France or Poland in the quarter-finals.

Senegal's current squad are looking to match the side from 20 years ago and reach the last eight in what is their first ever meeting with England.

The Teranga Lions go into the game without record goalscorer Sadio Mane, ruled out of the tournament through injury, but five different players have chipped in with goals in his place as the West Africans finished second in Group A.

"Even in the absence of Sadio, which is a big loss for us, we learned to reorganize and play differently," Daf, now manager of French Ligue 2 club Dijon, added.

"All the players are capable of scoring and being dangerous so we must rely on this collective to win this match."

England are fifth in the Fifa world rankings while Senegal - coached by Daf's former team-mate Aliou Cisse - are 18th, having become Africa's top-ranked side in November 2018.

"Our opponent is one of the best teams in Europe but Senegal are not African champions for nothing," Daf said.

"We arrived in this competition with a lot of ambition. The boys show it in every game, I hope they will take this game with a lot of energy. This team is a pleasure to watch."

Captain of the 2002 squad, Cisse took charge of Senegal in 2015 and lost the Africa Cup of Nations final in 2019 before returning to lift the title in Cameroon earlier this year.

"Aliou is a very intelligent person, very pragmatic. Being a leader of men is one of his qualities," Daf said.

"I think Aliou will choose the same strategy [as previous games] to beat this English team. In any case we are confident, it is 50-50 and we must be ready on the day."

Aliou Cisse took charge of Senegal in 2015
Several of Senegal's 2002 squad moved to England's Premier League after their impressive run in the Far East, including Cisse (to Birmingham City), striker El Hadji Diouf (to Liverpool) and the late midfielder Papa Bouba Diop (to Fulham).

Ten of Senegal's squad in Qatar are based in England, with the majority having top-flight experience.

However, Everton midfielder Idrissa Gana Gueye will miss the game with suspension while Nottingham Forest midfielder Cheikhou Kouyate is an injury doubt.

Alassane N'Dour, another member of the history-making 2002 squad, concurs that Senegal must continue the attacking instincts they showed in their final Group A match, a 2-1 win over Ecuador on Tuesday.

"We know about England's football. They have a great squad - on the bench you can see (Jack) Grealish - with so many good players," N'Dour told BBC Sport Africa.

"Senegal has a chance, because most of their players play in the Premier League or the Championship.

"We have to play our game and concentrate like we did against Ecuador. We can defend and then proceed to the counter-attack.

"Our players are so quick - they can move with the ball, attack with the ball. We need to be tactically defensive before attacking, because if we [concede] a goal in the first half, in the beginning of the game, it can change everything.

"So we have to make sure we are tactically defensive before attacking."

Omar Daf (right) helped Senegal reach the quarter-finals on their World Cup debut in 2002, where the Teranga Lions were beaten by Turkey