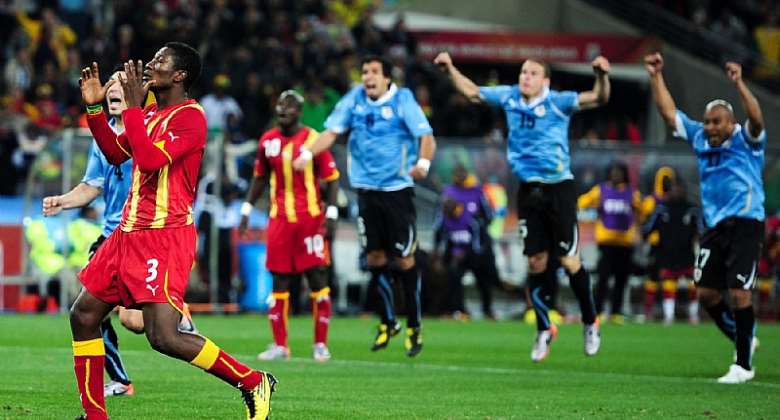 Asamoah Gyan has said he does not know how he failed to convert the crucial penalty against Uruguay at the 2010 World Cup in South Africa.

Gyan, who joined Sunderland after the 2010 World Cup in a then club-record £13m transfer, scored three goals in South Africa and Ghana were on the attack in the last minute of extra time as their thrilling 2010 quarter-final with Uruguay was tied at 2-2.

Suarez blatantly blocked Dominic Adiyiah's header on the line with his hand and was promptly sent off - but Gyan could not take advantage as his penalty bounced off the bar. Suarez, watching on from the tunnel, wildly celebrated the miss.

The match went to a penalty shootout and Gyan scored Ghana's first penalty, but Uruguay won 4-2 before losing to the Netherlands in the semi-final.

"I scored a penalty in the first game, a very crucial one against Serbia and I scored against Australia through a penalty as well," recalled Gyan, now 36 and without a club during an interview with the BBC.

"I scored in extra time against America so the confidence level was that high. Against Uruguay when we had a penalty, although there was pressure, I was the most confident player in the world.

"I just needed to step up and shoot. Honestly, I will say it was one of these days because my penalties do not go that high.

"I didn't know how that penalty went high. I think it was a technical error or something.

"When we went to the penalty shootout I just wanted to prove a point. I had to step up and I scored - you have to come back and prove yourself."

Ghana will face the South American side in their final Group H game at the Al Janoub Stadium later today with kick-off scheduled at 15:00GMT.