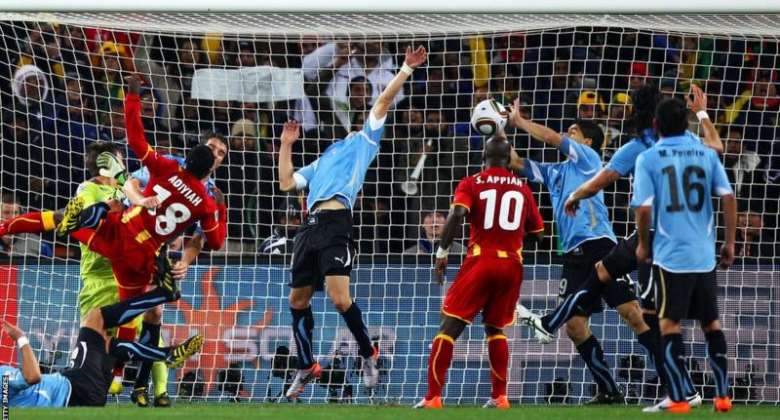 For many Ghanaians, one word has dominated the build-up to their final Group H match against Uruguay at the World Cup: revenge.

A reunion with the South Americans and in particular Luis Suarez, who denied the Black Stars a chance of history in South Africa in 2010, gives the West Africans a chance to lay old ghosts to rest.

Twelve years ago at Soccer City in Johannesburg, with their quarter-final locked at 1-1 deep into extra time, Suarez kept out Dominic Adiyiah's header with an infamous goalline handball, preventing Ghana from scoring a winner which would have made them the first African side to reach the last four.

Asamoah Gyan missed the resulting penalty as his effort clipped the top of the crossbar, and TV cameras captured Suarez, who had been sent off, celebrating that miss gleefully before Uruguay won 4-2 on spot-kicks.

That night a cross-continental rivalry was born - with the second chapter set to play out in Qatar's Al Janoub Stadium on Friday (15:00 GMT).

The anticipation has been building ever since April when the two sides were drawn together.

"When the draw was made and they saw Uruguay in Ghana's group the only thing that came into mind was revenge. Ghanaians want revenge.

"Personally, I just sat back and smiled because I understand how the game goes."

Former Ghana defender John Paintsil, another member of the side 12 years ago, recalls the support the Black Stars received during the first World Cup finals held in Africa.

"Before we played Uruguay, the whole of Africa was with us," he told BBC Sport Africa.

"Even the world was supporting Ghana. It was historic, the first time Ghana reached the World Cup quarter-finals.

"When I saw the draw, Ghana against Uruguay, it was exciting. I will say it will be a payback time to get out from the group. We must beat Uruguay at all costs."

Ex-Ghana striker Kwesi Appiah added: "What they did to us in South Africa was crazy.

"It feels like we, and African football, were robbed of a historic journey. It just burned deeper than anything you can imagine."

Andre Ayew is the sole survivor from Ghana's squad from the 2010 finals, although the current captain did not feature in the last-eight tie against Uruguay.

Uruguay, meanwhile, has four players remaining, with striker Edinson Cavani, goalkeeper Fernando Muslera and Suarez all playing against the Black Stars in Johannesburg, while Diego Godin was an unused substitute.

Former Liverpool and Barcelona forward Suarez and Cavani, both 35, and 36-year-old center-back Godin have all featured for the South Americans in Qatar.

With both former players and supporters looking for some form of redemption, results so far at the tournament in Qatar mean Ghana hold the upper hand going into the deciding round of fixtures.

The Black Stars know they will get a place in the last 16 - and eliminate Uruguay in the process - if they pick up three points, while a draw could also be enough to progress if South Korea fail to beat Portugal in the other game in Group H.

Uruguay have not scored yet in Qatar and must win to go through, but will also rely on a favorable result from Portugal.

Despite the extra attention on the match, Ghana coach Otto Addo says he is "not a guy who thinks of revenge" heading into their meeting with Uruguay, who won the World Cup in 1930 and 1950, and Ayew shares those sentiments.

"I am not looking back, I don't want to focus on the past. Revenge or not, we would go with the same determination and desire to win because we want to get to the next stage."

Ghana has been involved in two high-scoring games so far, losing 3-2 to Portugal in their opener before beating South Korea by the same scoreline on Monday.

Appiah, who was part of the Ghana squad which finished as runners-up at the 2015 Africa Cup of Nations, says Addo's side need to "tighten up" defensively and "be a lot stronger" if they are to progress far in Qatar.

Yet he believes victory against Uruguay on Friday would provide some form of closure following the trauma inflicted on his country a dozen years ago.

"This is the one that we have to win, we have to just do it, and then it's over," the 30-year-old, who is on loan at Colchester United from Crawley Town, said.

"It just makes up for 2010. I'll never ever think about Uruguay ever again. It will be just like we've just laid some old demons to rest and it's over."

Suarez, who now plays back in his homeland for Nacional, has featured in both of Uruguay's games in Qatar but the South Americans are bottom of Group H and without a goal