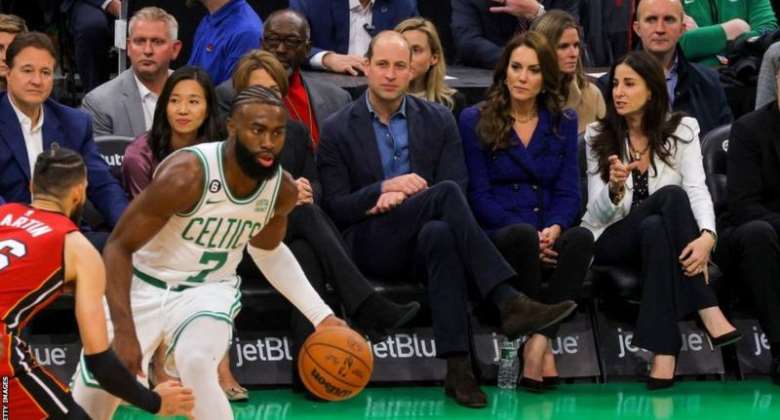 The Boston Celtics extended their winning streak to five games with a 134-121 victory over the Miami Heat in front of the visiting Prince and Princess of Wales.

Jayson Tatum scored a season-high 49 points and had a game-high 11 rebounds, with Jaylen Brown adding 26 points.

The Celtics are now unbeaten in their last 10 home games.

Prince William and Catherine are in Boston to hand out awards for their Earthshot Prize.

In Arizona, the Phoenix Suns won their sixth game in succession by beating the Chicago Bulls 132-113.

Elsewhere, the Milwaukee Bucks held off the New York Knicks for a 109-103 win, while the Minnesota Timberwolves edged the Memphis Grizzlies 109-101.

LeBron James' 31 points led the Los Angeles Lakers to a 128-109 win over the visiting Portland Trail Blazers, while the Lakers' city rivals the Los Angeles Clippers lost 125-112 as the Utah Jazz ended a five-game losing streak.

Kevin Durant scored 39 points for the Brooklyn Nets in a 113-107 win over the Washington Wizards, improving the Nets' record to 12-11 for the season.

There were wins elsewhere for the Cleveland Cavaliers, the New Orleans Pelicans, the Atlanta Hawks, the Oklahoma City Thunder, the Sacramento Kings and the Denver Nuggets.