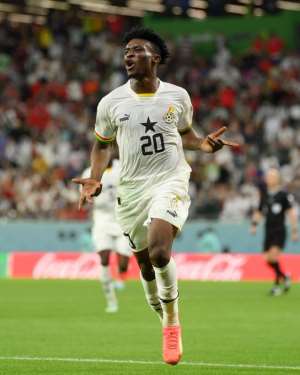 The youngster has displayed outstanding form at the ongoing tournament in Qatar where Ghana is competing in Group H.

In the first two group matches against Portugal and South Korea, the Ajax forward has been unplayable.

He has two goals, one assist, and one Man of the Match award for his immense contribution to helping the Black Stars.

Speaking on German television Sport1, KP Boateng who has been amazed by the performance of Mohammed Kudus said he believes the 22-year-old is currently the best player at the tournament.

"Kudus is the best player in the World Cup at the moment and he overly impresses with what he does. It's incredible what he can do with the ball," KP Boateng said.

According to the former AC Milan superstar, Mohammed Kudus will soon leave Ajax to sign for one of the top European clubs.